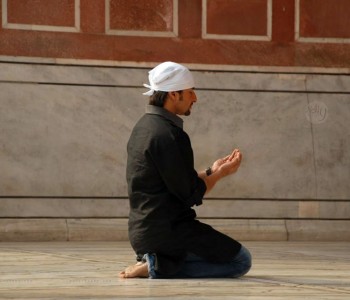 Converts to Islam are important ambassadors for American Muslims; increasing their participation should sit high on the priority list of the larger Muslim community. Although many improvements have been made in convert outreach, far too many who are new to the faith lack a strong sense of authenticity as Muslims, and consequently end up slowly disengaging from the religion. Unfortunately the messages they receive from other Muslims often reinforce their alienation.

Changing the way we talk about Islam could go a long way toward cultivating a sense of belonging among these brothers and sisters, and deepening their personal connection to Islam. Whether we were born as Muslims or embraced the religion later in life, we are all students of faith. We may not realize, however, that those who have newly accepted Islam may look to us for guidance, taking our opinions to heart. In this sense, we sometimes become teachers for our fellow Muslims.

One trait shared by successful teachers is the ability to introduce new material without using technical language. By employing clear, familiar terms to lay out a new idea, the concept no longer appears foreign and inaccessible to the listener. This method works just as well in mosques as it does in classrooms, but Muslims rarely use it when “teaching” Islam.

When discussing religion, we tend to sprinkle our speech with Arabic terms and references to the Qur’an. Many of these words have been absorbed into languages like Urdu and Indonesian, but none have made their way into English. What might be a natural way of speaking for some Muslims can leave a convert struggling to keep up. While there is no need to start saying things like “Insha’Allah” (God willing) in English, minimizing theological jargon would do a lot of good.

The Qur’an reminds us that in religion, substance trumps terminology:

Say: “Invoke Allah (God), or invoke Ar-Rahman (the Most Gracious): by whichever name you invoke Him, [He is always the One- for] His are all the attributes of perfection.” (17:110)

Just as God remains unchanged by the names we use, so too do the principles of His religion. Even a single adjustment, like substituting “God” for “Allah,” will introduce a concept or message to a convert in a much more intimate and personalized manner.

Tellingly, it was the words of a non-Muslim that brought me back to Islam when I was faltering in my faith. On a whim one day, I bought a copy of “Muhammad: A Prophet for Our Time” by Karen Armstrong. The entire book was brilliant; I was most affected, however, by Armstrong’s analysis of a verse from the third chapter of the Qur’an. I had read this verse before, but never with the translation she used:

For if one goes in search of a religion other than self-surrender unto God [Ar. “Islam”], it will never be accepted from him, and in the life to come he shall be among the lost. (3:85)

Armstrong then goes on to say:

This verse is often quoted to “prove” that the Qur’an claims that Islam is the one, true faith and that only Muslims will be saved. But “Islam” was not yet the official name for Muhammad’s religion, and when this verse is read correctly in its pluralistic context, it clearly means the exact opposite. (p. 87)

Armstrong’s analysis opened my eyes to the reductive way I had been thinking about Islam. In my mind, my religion boiled down to five pillars: belief in God and allegiance to Muhammad (“shahada”), prayer (“salat”), fasting during Ramadan (“sawm”), charity (“zakat”) and pilgrimage to Mecca (“hajj”). Being a Muslim, I assumed, simply meant following these pillars. Armstrong’s simple observation made me realize that “Islam” extends far beyond a checklist of rituals. To Muhammad’s companions, the word signified a state of being – not an institutionalized religion.

At that time, I was what some would call a non-practicing Muslim; after an early spell of enthusiasm, I had stopped praying, reading the Qur’an and visiting the mosque. Looking back, I see that my struggles reflected a larger problem in the Muslim community.

Many converts’ spiritual stagnation comes from the perception that Islam is cut-and-dry. Too many of us see our religion in purely legalistic terms, reducing it to a formula in our minds. As a result, we tend to present Islam to converts as if it were a pre-packaged product rather than a journey of growth and introspection. God forgive us – we have turned Islam into Islam™.

As a new Muslim, my spiritual “starter kit” basically consisted of the promise of paradise, a list of commandments and a glossary of Arabic words. This sustained me in the beginning, but before long I started to feel like an actor, mindlessly parroting lines from a script I barely understood. Instead of expressing Islam’s eternal values in my own life, I was trapped in a performance of someone else’s.

Language played a key role in my crisis. Concealed behind Arabic names, timeless ideas felt like artefacts to me, stripped of their relevance and narrowed in scope. As an English speaker, for example, it was easy to imagine the word Islam as representing only the formal name of a specific, monotheistic belief system. The English phrase “self-surrender unto God,” on the other hand, felt much more expansive and struck a powerful chord with me. Maybe there was more to this religion than I thought.

After finishing Armstrong’s “Muhammad” I began reading the translation of the Qur’an that she used, Muhammad Asad’s “The Message of the Qur’an.” These two books profoundly changed my faith by forcing me, for the first time, to place Islamic concepts in my own idiom, rather than resign myself to rigidly predefined ideas and rituals. “Translating” Islam into familiar terms left me with a much deeper attachment to this self-surrender.

Arabic will always remain important to our religion, and all Muslims should learn the language, not only the alphabet and grammar, if possible. However, we should not mistake the message for its medium. The Qur’an was revealed in Arabic so that Muhammad’s people would understand it. Too few of us follow this principle when communicating with converts. Overused and poorly explained, Arabic terms have become a barrier to their faith. If we learn how to talk about our religion in a more nuanced way – in English, we can give new Muslims an Islam that truly speaks to them.