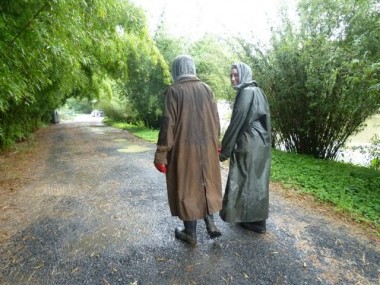 It’s the end of 2010, and like most people we were looking for a Summer holiday to unwind.  The options were numerous and after considering some of the usual holiday destinations such as Melbourne and the Gold Coast, a chance encounter with a local anomaly — a Muslim Greenie — introduced us to the concept of ‘WWoofing’ which was to take place near Byron Bay — this appealed to our sense of adventure the most because it was exciting and would hopefully be a great story to tell at the next dinner party.  In a nutshell, wwoofing is “willing workers on organic farms) where you work on a farm for accommodation and food– but let‘s face it, it was the prospect of gawking at the hippie population near Byron Bay that initially piqued our interest.

The farm we opted to work for was Zaytuna farm located in The Channon — about an hour from Byron Bay, in Northern NSW. Our little city slicker hearts were shocked to the system when we realised our  idealised vision of farm life wasn’t exactly a romanticised version of Little House on the Prairie — which is what we were banking on —  but it became more or less reminiscent of an episode of Survivor. Hyperboles aside, our introduction to farm life consisted of sleeping on floors, the constant presence of dangerous predators such as brown and Red belly snakes, the invasion of cane toads terrorising our every move and best of all, the ever charming prospect of having to indulge in compost toilets (a glorified hole with a toilet seat for the uninitiated). 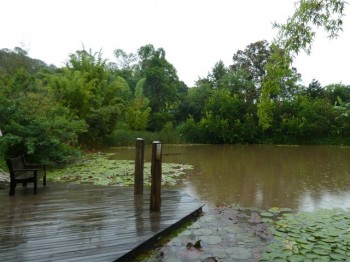 The first night on the farm left us overwhelmed by the deafening cacophony of sounds that were foreign to our metropolitan ears. We were awestruck by the natural soundtrack of the wilderness — an orchestra of frogs, insects, birds and all sorts of creatures harmonising to the tune of the Earth. This was a striking difference to the unnatural, artificial sounds of the city that we’ve become accustomed to.  It dawned upon us that this is what the Earth is meant to sound like.

Surprisingly, we adjusted to the routine of farm life quickly — even the compost toilets found their appeal as we slowly started to embrace the alternative lifestyle we found ourselves in. Daily tasks included waking up at 6 AM to feed the various animals, moving the gloriously mountainous compost piles, helping to collect the cows from the paddock for milking (and occasionally being head butted by Honey, one of the dairy cows) and collecting fresh eggs from the hens’ nest. These tasks were completed before our day would normally begin when we’re at home, which was a grand achievement in itself, bordering on a miracle.

The fresh milk we obtained was used to make yoghurt, Ricotta cheesecakes and most of the food we ate came from what we had harvested. Needless to say, we felt extremely proud of ourselves for such menial victories that come as a no-brainer to country folk. It was an education to realise that our milk, fruit and vegies came from a farm and were not harvested in our local Woolworths.

After the third day of adapting to farm life, we started to embrace all the aspects of the land that scared the living daylights out of us — including those pesky little cane toads. We even developed a relationship with Bluey — the Blue Heeler protecting the farm. For women like us; to embrace a dog without losing our minds about the state of our ablution was a victory akin to a history-making treatise. After a few days on the farm, we started to obnoxiously fancy ourselves as modern day Dr. Doolittles. We even adopted farm hats and a penchant for flannel. At one stage we were channeling the Man from Snowy River in our Drizabones – a look that would normally be a criminal offence to our city personas. 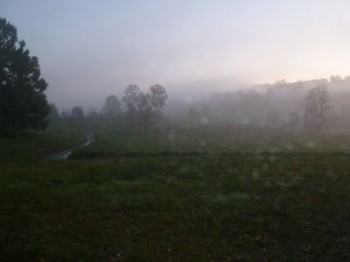 In spending nearly a week on the property, we had somewhat of an epiphany when we realised that every facet of the farm had a purpose and was designed as part of an integrated community which was coexisting for a singular function — to establish a holistic lifestyle that limits human destruction to the perfection of the natural world.  Basically, nature is better equipped to handle itself and flourishes when there is minimal human intervention. For instance, the infamous compost heap was used to regenerate nutrients to the soil without the wastage of water — which is fast becoming a precious resource that we are currently taking for granted.  We were pleasantly surprised by the dynamics of the systemic advancements adopted by the farm. Every human and animal was giving back to the system and nothing was wasted which is a far cry from the mindless exorbitance of urban life that we have become accustomed to.

We realised that what we were witnessing was a concept commonly known as Permaculture — which was the philosophy the farm was adhering to.  To put it simply, if Permaculture was an environmental rehabilitation group, a la addiction anonymous groups, the members of the circle would have to chant three main ethics before each meeting:  Care of the Earth, Care of People and Sharing the Surplus.

The longer we stayed on the farm, the more distant and illogical our urban, lifestyles seemed to us. It made sense to us to foster sustainable growth and we realised that this holistic way of life complemented our Islamic beliefs. Work began at Dawn and we were finished by Midday – time didn’t seem like a precious commodity and we were able to enjoy the day as it was used to its entirety. Most importantly, we were able to challenge ourselves spiritually, mentally and physically by the mere presence of nature surrounding us. In an era of iPhone hunchbacks and  a growing proclivity to social network hermitage, it was a stark contrast to be in an environment that encouraged human discourse and human connections as evidenced by the workers routinely gathering for communal meals at breakfast, lunch and dinner. It was also a blessing for us to see The Creator’s oft-repeated attributes manifesting themselves so vividly in everything that surrounded us. Witnessing the direct, undiluted relationship between the Creator and Creation was a fulfilling experience that greatly differed from the distraction we constantly face living in an urban sprawl.

All in all, we learnt a great deal from our time in The Channon. Namely, the idea that natural resources are finite and at critical levels, and the responsibility of Muslims to ensure these blessings are passed on to future generations is vital — as opposed to being squandered to a spoiled generation. Allah (swt) has given us a responsibility to be the custodians of the Earth and it is imperative that Muslims lead the charge in upholding those rights. As our experience testified, being in synchronicity with nature leads to the oft-sought-after path of human contentment. It is a great irony that people all over the world are constantly searching for some form of peaceful serenity when in reality, that peacefulness surrounds every single one of us and has done so since time immemorial.