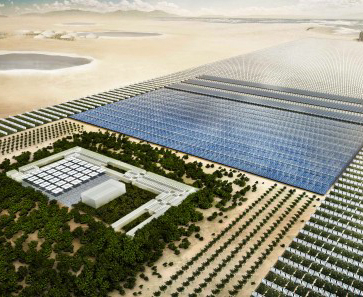 An ambitious project that aims to turn arid desert land into a green oasis took a step closer to becoming reality last week when an agreement was signed on the rights to develop a pilot system in Jordan. The Sahara Forest Project’s (SFP) first facility will be located on a 2,000,000 square meter (21,527,821 sq. ft.) plot of land in Aqaba, a coastal town in the south of Jordan where it will be a test bed for the use of a combination of technologies designed to enable the production of fresh water, food and renewable energy in hot, arid regions.

The partners behind the Sahara Forest Project are Bill Watts of Max Fordham Consulting Engineers, Seawater Greenhouse, Exploration Architecture and the Bellona Foundation, an international environmental NGO based in Norway, who have been working on the idea since 2009.

In 2009, after first studies showed that the concept was feasible and economically viable, the project was presented internationally at the December 2009 UN Climate Conference in Copenhagen, Denmark, where it was well received. In June, 2010, Jordan’s King Abdullah II saw a project presentation during a visit to Norway and was impressed enough to say he was ready to facilitate its implementation in Jordan.

The main pillars of the project are saltwater greenhouses, concentrated solar energy, and cultivation of traditional crops along with energy crops such as algae, which all come together in one location to solve a whole range of environmental problems.

The SFP would use saltwater greenhouses to grow crops throughout the year in desert locations without any supply of freshwater. Seawater is evaporated from grilles at the front of the greenhouse to create cool humid conditions inside. A proportion of the evaporated seawater is then condensed as freshwater that is used to irrigate the crops, re-vegetate surrounding dry areas and provide water to the concentrated solar power plant.

The solar power plant is in turn used to generate electricity to power the pumps to transport the seawater from the Red Sea to the saltwater greenhouse and the fans to circulate the humid air within the greenhouse. The greenhouse will also be used to cultivate algae to absorb CO2 and provide biomass to be used for energy and food production.

The project partners say that, in essence, when these different technologies are put to use in a combined approach, the processes will start “feeding” each other and provide not only environmental, but also commercial benefits.

The project envisions three separate stages of development. In depth studies will be carried out throughout 2011, construction of a Demonstration Centre is slated to start in 2012, and commercial-scale development is set to start in 2015.