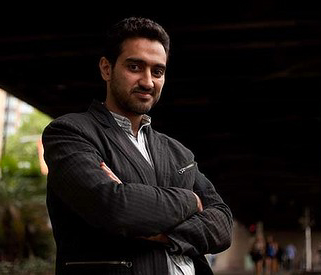 A contempt for hypocrisy drives this man of many careers, writes Nick O’Malley.

For a man so given to precision in language and order of thought, Waleed Aly’s career is a fabulously sprawling accident.

Aly, 32, is a lecturer and doctoral candidate at Monash University, an author, essayist and opinion writer, he is host or co-host, fill-in host, regular guest and, in one case, co-creator of six radio and television programs.

He has been a lawyer, is a qualified engineer and has been on the executive of the Muslim Council of Victoria. He would chuck it all in in a flash, he says, if the band in which he plays guitar, Robot Child, could crack the big time.

”I don’t actually do that much media,” he tells me over a round of halal duck pancakes on a thick, hot Friday afternoon.

I must have looked unconvinced. ”I do less media than it appears,” he offers. ”The media stuff I do is like that,” he says, spreading his arms and twirling his hands to suggest a jumble of odds and ends.

And finally, ”It’s not a lot compared to someone who works in the media.” But it is, I suggest, more than prolific for an academic.

Surrounded by boozy suits at Neptune Palace in Circular Quay, Aly answers my questions carefully and generously, but defers to the general rather than the specific, global rather than personal.

Towards the end of our mains, Aly concedes a little ground and tells the story of how a serious young student became a writer and broadcaster and, for many, the public face of Islam in Australia. It started on September 11, 2001.

”September 2001 was the last time Richmond was in the finals,” Aly begins as only a Melbourne boy could. ”They had a training session at Punt Road on the Tuesday. I remember it was a beautiful day and I went with my sister-in-law and her two kids.”

Hours later the planes hit the towers. ”9/11 was a watershed because your social existence as a Muslim Australian changes basically overnight. At that point you go from a position where your predominant experience is one of racial difference and ethnic difference to one where you are now presumed politically malignant, threatening.”

The journalist Martin Flanagan was also at training that day, and he was so moved to see Aly among the supporters he wrote about it in a story published in The Age the following Saturday:

”Looking around, I saw a young woman in a Muslim headscarf, a young man and two small kids and thought how good this game can be. They were just another Richmond family.”

Aly says: ”I read it at the ‘G’ waiting for the game to start. I had always loved Flanagan’s stuff so I emailed him.”

A friendship formed and Aly confessed his journalistic ambitions to Flanagan, who encouraged him to send anything he wrote. Aly sent three comment pieces in the wake of the attacks.

”I’ll never forget, I was at a meeting at Melbourne Uni when the phone rang. I saw it was The Age’s number. I answered and he said [here Aly does a passable imitation of a gruff man’s voice], ‘Aly, it’s Flanagan. Mate, writing is like footy – you can either play or you can’t. And you can play.’ ”

One of his pieces finally found its way into the paper and Aly applied for an Age cadetship, but things didn’t work out. The cadetship exam was held on Grand Final day so Aly didn’t show up, taking a job instead as a judge’s associate with Justice Stephen Kaye of the Family Court. With a young family he needed certainty.

A year later, preparing to start work in a commercial law firm, Aly couldn’t shake the bug. He wrote an opinion piece on France’s decision to ban the headscarf that was published in The Australian.

The piece touched on a handful of recurrent Aly themes – his demand that language be precise, his contempt for hypocrisy.

”I have a thing for philosophical consistency,” he says. ”My arguments often end up like this – it is not so much I want you to oppose banning the hijab (though that is my position), it is that if you want to ban the hijab then I want you to adopt these positions, too: I want you to explicitly state that you don’t value individual freedom above certain other things.

”Then you have to identify what those other things are, and then be consistent about your application. If you can do that I will disagree but respect your position and know that it is not about some form of prejudice.”

Aly remembers how excited he was to see his work published again. ”I got obsessed with writing for newspapers. I was kind of aware at the time that this was a bad career move for a lawyer but I just couldn’t help it. Partly because I loved writing but also because I thought there was a need for it at that moment.”

There was a need for it. Australia after September 11 and the Bali bombings and in the wake of elections fought over boat arrivals, at once misunderstood and feared its Muslim minority. Aly, the son of Egyptian intellectuals who migrated to Australia in the 1960s to further their education, was in a near-unique place to add some balance to the public discourse.

His own experience of alienation in suburban Melbourne in the ’70s was mitigated by the fact he was a better than average batsman and footballer. ”It helps to get picked first at lunchtime.”

Aly was as Australian as he was Muslim, yet even then his politics were hard for some to place.

He wrote in defence of the hijab only to argue a few weeks later that the attempt to cleanse Christianity from Christmas was not multi-culturalism but ”anti-culturalism”.

Impressed by Aly’s work, the ABC radio host Jon Faine asked him to co-host his Conversation Hour. Aly relished the chance to talk about topics not related to race, politics and terrorism.

”I run into older Muslims, say people my parents age or a bit younger, and they will say what an impact it has had on their kids to hear someone with a name as funny as theirs on radio in the chair,” he says.

The ABC soon asked him to fill in for Faine when the popular host went on leave, a move he resisted for two years but now enjoys.

His career took another twist with his essay The Clash of Ignorance, published in The Age in 2005. He argued that Muslims in the wake of September 11 were reduced in the Western mind to either moderate or fundamentalist, both loaded political terms that mean nothing to most Muslims.

”In fact, to be labelled a moderate Muslim is offensive in the way it is to be called a moderate intellect,” he wrote. ”It implies that it is socially acceptable to be a Muslim, as long as you are not too Muslim.”

Mostly though, he argued that because of ignorance on both sides of the divide, dialogue between Islam and the West was failing.

”No one understood the meaning of what they were saying.”

The essay caused a minor sensation and became the basis for the book People Like Us, published in 2007. It led to Monash University inviting him to become an associate and eventually to join its staff. He now lectures in its Global Terrorism Research Centre.

Last year Aly tackled another of his recurring themes, the warping of conservatism, a political philosophy for which he says he has great sympathy. (This is as close as Aly comes to identifying a political affiliation.)

His Quarterly Essay argued that conservatism had lost its way and many of those who identified as conservatives advocated policies and philosophies that were not.

As hi careers in writing, broadcasting and academia took off, a side project began to bear fruit. Aly was one of the creators and hosts of a panel and sketch show, Salam Cafe, on Melbourne community radio. The show, recently described on French TV news as the Western world’s first Muslim comedy sketch, began to win awards and was eventually bought by SBS.

This week SBS will air a new Aly vehicle, The Late Session, a late-night chat show around a dinner table of five guests.

1996 Graduates from Wesley College with an International Baccalaureate.

2001 Finishes six-year engineering-law degree; is first published by The Age.

2002 Marries the academic Susan Carland, who had converted to Islam in 1998. They have two children.

2005 First major essay published and his book People Like Us is commissioned (published in 2007).

2009 Plays lead guitar in one of the first theatrical productions of Pink Floyd’s album The Wall.

2011 SBS to air his chat show The Late Session.