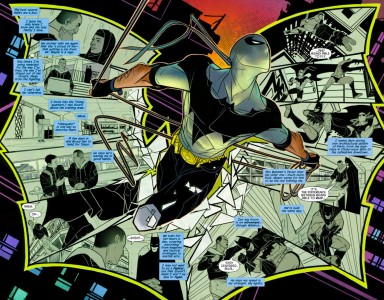 The choice of a Muslim comic superhero to help the fictional American character Batman in fighting criminals in France is drawing the ire of rightists in the United States.

Batman is a fictional comic character who is fighting crimes around the world.

In the December issues of DC Comics Detective Comics Annual and Batman Annual, the caped crusader has set up Batman Incorporated, a global crime-fighting network with a superhero in each major city around the world to fight crime.

“The character’s name is Bilal Asselah and he is an Algerian Sunni Muslim and an immigrant that is physically fit and adept at the gymnastic sport parkour,” said Huston.

Asselah, a 22-year-old Muslim of Algerian origin from Clichy-sous-Bois, a tough Paris suburb where urban unrest sparked riots in immigrant districts across France in 2005.

The riots were the catalyst, as the comic books showed, behind turning Asselah, a once-peaceful Parisian into a masked crime-fighter.

One night, Asselah and his friend were caught up in the unrest where they were beaten up by police who mistook them for rioters.

Asselah’s furious friend reacted by burning down a police station and ended up being killed by police.

Bilal, on the other side and thanks to the influence of his pious Muslim mother, rejects hate and fear.

Grieved by his friend’s death, the Muslim young man turned to parkour, a form of acrobatics where practitioners jump from buildings and leap over walls and street furniture.

When riots again threaten to engulf his neighbourhood, he puts on a mask and, using his parkour skills, becomes Nightrunner and sets out to set things right again.

The Muslim youth’s integrity, athletic prowess, and triumph over personal grievance made him the favourite choice to represent the Batman Incorporated in Paris.

Right-wingers said that a Muslim was not fit to play the role of a superhero and fight crime.

“Unfortunately, readers of Batman will not be helped to understand what troubles are really besetting France,” Huston wrote on Publius, his Forum.

“DC Comics has submitted to Islam,” he wrote on his blog.

The Angry White Dude blog described Islam as the “religion of murder” and mocked that “Nightrunner the Muslim sidekick will have strange new powers to bury women to their waists and bash their heads in with large rocks.”

But, the creators of the character defended their choice of a Muslim superhero to fight crime in France.

“The urban unrest and problems of the ethnic minorities under (President Nicolas) Sarkozy’s government dominate the news from France,” David Hine, the writer of the album featuring Nightrunner, said.

“It became inevitable that the hero should come from a French Algerian background,” the British-born author said.

He said that the Nightrunner is “the kind of hero I would want to see in a comic book if I were French.”