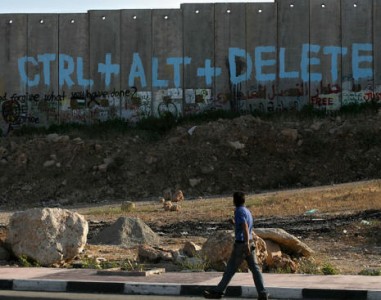 I have three answers,” the Jew told the rabbi when his neighbour sued him for not returning a borrowed jar. “First, I never borrowed a jar from him. Second, the jar was broken. Third, I returned it to him long ago.”

Contrary to everything you thought, Lieberman wants peace, indeed is yearning for peace. This week he summoned Israel’s 170 senior diplomats and revealed his thoughts to them. First of all, Lieberman settled accounts with the Turks. They demand an apology from Israel for the killing of nine Turkish activists on the ship that tried to break the Gaza blockade. The Turks also demand that Israel pay indemnities to the bereaved families. “There is no limit to their chutzpah,” Lieberman thundered.

The foreign minister knew, of course, that Netanyahu was negotiating with the Turks in order to put an end to the conflict. The Turks on their part know that Israel controls the US Congress and therefore also believe that a compromise would be good for them. Netanyahu’s emissary was looking for a formula that would be short of an apology and yet satisfy Ankara.

Lieberman has put an end to this appeasement. Netanyahu cannot afford to look like a wimp next to his macho foreign minister. So he declared that he would never ever apologize. For Lieberman, that was a major victory. Netanyahu capitulated. The Turks remain enemies. What more can a foreign minister hope for?

But Lieberman does not rest on his laurels for a moment. At the same meeting with the select 170 he laid out his great plan, Plan B.

Just a moment. If this is Plan B, what is Plan A? Netanyahu, of course, has no peace plan. His declared position is that the Palestinians must return to direct negotiations without prior conditions, but only after they officially recognize Israel as “the state of the Jewish people” (or, in another version, as a “Jewish and democratic state”.) It is clear that the Palestinians cannot be expected to agree to any such prior condition. So what “Plan A” does Lieberman allude to? Not to Netanyahu’s, but to Barack Obama’s. The American president speaks about two states with the border between them based on the 1967 lines and a Palestinian capital in East Jerusalem.

On no account, says Lieberman. And, like the Jew who was sued for the jar, he also has his three reasons: First, we have no partner for peace. Second, the Israeli government cannot make peace. Third, peace is no good for us.

Lieberman, the immigrant from Moldavia, knows the Palestinians much better than they know themselves. Therefore he states categorically: “Even if we offer the Palestinians Tel Aviv and a withdrawal to the 1947 borders, they will find a reason not to sign a peace treaty.” (The 1947 borders, fixed by the United Nations, gave Israel 55 per cent of the country, while the 1949-1967 borders left Israel with 78 per cent.)

True, this matter could be settled easily: Israel could enter negotiations and offer a peace plan within the parameters set by President Bill Clinton and adopted by Barack Obama. If the Palestinians refuse, we would not lose anything and they would be shamed before the whole world. Lieberman, so it seems, did not overlook such a possibility, and so he has prepared an alternative argument: We cannot negotiate with the Palestinians because they have no legitimate leadership.

Why not legitimate? Mahmoud Abbas’ term of office has expired. The Palestinian Authority has held no new elections. Can one demand of Israel, the beacon of democracy in the Middle East, to make peace with a leadership that has not been lawfully elected? A committed democrat like Lieberman cannot and will not agree to that.

But this does not interest Lieberman. He will not compromise himself by negotiating with an administration whose democratic credentials are in doubt. This is not so important, because, according to Lieberman, Israel itself cannot make peace.

Quite simply, “there are sharp differences of opinion within the coalition”. As he puts it: “I don’t think that it is possible to achieve a common denominator between Eli Yishai and Ehud Barak, or between me and Dan Meridor, or even in Likud between Benny Begin and Michael Eitan (Meridor, Begin and Eitan are all ministers without portfolio)…In the present political circumstances, it is impossible for us to present a plan for a permanent settlement, because the coalition would simply not survive.”

For Lieberman, as for Netanyahu, the continued existence of the present coalition is clearly more important than reaching a “permanent settlement”. But, fortunately, he has an alternative that is much better than a final peace agreement. It is called “Long-Term Interim Agreement.” This week, Lieberman leaked its basics: “A significant increase in cooperation with the Palestinian Authority in the areas of security and the economy…The aim of the plan is to stabilize even more the situation in the West Bank and increase the security cooperation with the Palestinian Authority in order to give the Palestinians more security responsibilities for what’s happening on the ground.”

So, it is possible after all to cooperate with the illegitimate regime of Abbas, if he continues to collaborate with the Israel military and Shin Bet to prevent attacks in Israel and the settlements. For this service, he will be paid well: “The Plan will act to strengthen the Palestinian economy significantly by increasing the freedom of movement between the Palestinian towns in the West Bank and providing various economic inducements.”

The plan also fixes targets: The Palestinian GNP pro capita must reach about $20,000 (more than ten times its present level). “When the economic situation within the Palestinian Authority is similar to that in Israel, it will be easier to renew the political negotiations and achieve a permanent settlement.”

In other words, the occupation will continue until one of the following happens: the Palestinian standard of living will reach that of Israel or the Messiah will come – whichever happens first. In any case, there is no clear indication that either will happen within the next few decades..

But Netanyahu continued that if negotiations are resumed and these come up against a brick wall, it is very possible that there will be no choice but to conclude an interim agreement.

In practice, it is Netanyahu himself who is holding up the negotiations. And even if negotiations were resumed, they would soon come up against a wall, because of our government’s attitude toward East Jerusalem and the borders.

So what remains? Interim forever!