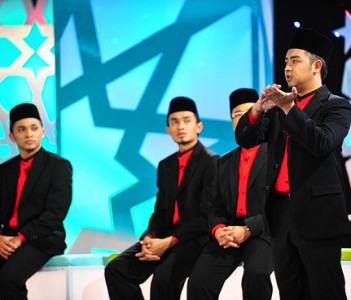 A smash-hit Malaysian TV search for young Islamic leaders on Thursday announced a new season which will see contestants venture deep into the jungle to preach to indigenous tribe’s people, this time widening its search for the best young Muslim leader by inviting contestants from around the world to take part in the program.

The “Young Imam” programme, which debuted last year, attracted worldwide interest as finalists tackled tasks including reciting verses from the Koran, washing corpses and slaughtering sheep according to Islamic rules.

The show, the first of its kind, was modelled on the reality-TV formula of programmes such as “American Idol” in the US, and its huge success prompted the creation of a second season which will be aired in April.

After their debut season was credited with energising young Muslims, the show’s creators said they intend to continue targeting the youth audience and illustrate how Islam can deal with modern social issues.

“The ‘Young Imam’ programme has a very high educational value in terms of showing how the Islamic rituals and practices are done,” said Zainir Aminullah, editor of pay-tv operator Astro which airs the programme.

“In a Muslim country we assume that Islam is practised by everyone but the level of interpretation and understanding obviously varies,” he said.

The second season will feature new tasks for contestants such as testing their religious knowledge on medical issues, and even how to handle the challenges of investing and the stock market.

In what could become a controversial element, they will also travel into Malaysia’s jungles to preach to indigenous people, many of whom are non-Muslims.

Some 60 per cent of the multicultural nation’s population are Muslim Malays, with the rest — including ethnic Chinese, Indians and indigenous tribes — practising Christianity, Buddhism and Hinduism, among other religions.

Malaysia’s minorities have complained that their rights are eroding as they face increasing “Islamisation” of the country.

During the 10-week season which will run from late April, 10 finalists — all of them male, confined to a mosque dormitory and banned from using phones, the Internet and television — will face written and practical tests.

One contestant will be eliminated each week, and the eventual winner will receive prizes including a job offer at a mosque.

The show, which recorded a 3.3 million viewership last season, will now be open to participants from other countries including neighbouring Brunei, Singapore and the world’s most populous Muslim nation, Indonesia.

The show has been hailed as softening the rigid image of Islam, and putting a more friendly face on Islamic scholars who play a broad role in Malaysian life, including leading prayers at the mosque and counselling troubled individuals.

“I want to encourage the youngsters to join the second season,” said 27-year-old religious scholar Muhammad Asyraf Mohamad Ridzuan who won the top Imam title in the first season, chosen from more than 1,000 candidates.

“After winning the show, I have travelled to many places to talk to young people and when you go out there, you will see the youngsters want a friendly teacher and they want us to share our understanding about Islam,” he said.