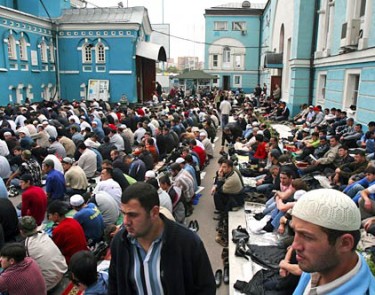 The launch of a fourth Muslim sheikhdom to be a representative of the sizable Muslim minority in Russia is drawing fire for undermining efforts to unify Russian Muslims under one umbrella.

“This is a striking blow to efforts to unify all Muslim Sheikhdom in Russia,” well-placed sources told OnIslam.net in exclusive statements.

Russian authorities gave approval last month for the launch of a new Muslim sheikhdom in Russia.

The Moscow-based body will be responsible for the affairs of Muslims in North Caucasus region.

“A group inside the Russian authorities is the main engine behind the launch of a fourth sheikhdom in Russia in an effort to keep Muslim religious authorities weak and frail in order for the government to be able to control,” said the sources.

There are three Muslim sheikhdoms in Russia.

Muslim leaders have been trying to unify the three Sheikhdom under one umbrella body in order to be able to speak in one voice for the Muslim minority.

“(But this move) has sparked speculations about the government support for the new sheikhdom to abort efforts to unify the sheikhdoms,” the sources said.

“What gives credit to this claim is the new body’s call for other sheikhdoms to join it.”

The sources cited a recent meeting between the head of the new sheikhdom Sheikh Mohamed Rahimov and a representative of Russian President Dimitry Medvedev.

“This meeting has been seen as a support of the Russian authorities for the new sheikhdom in order to keep Muslims disunited.”

The launch of a fourth sheikhdom is the latest of difficulties facing Russian Muslims in the past year.

“2010 was a difficult year for Muslim institutions in Russia,” the sources told OnIslam.net.

The sources said Russian authorities were tightening restrictions for Muslims to build their worship places.

“Though there are two million Muslims in Russia, the country has only five mosques,” the sources said.

“To perform prayers, Russian Muslims are forced to pray on the streets in freezing cold,” they added.

The sources said that Muslim requests to build mosques to accommodate for their growing religious needs have been turned down by Russian authorities.

“Moscow mayor has even vowed not to allow the construction of mosques in the capital.”

Last October, residents wrote to the Russian president demanding the halt of plans to build a mosque in Tekstilschiki district in Moscow.

The sources also complained of restrictions on funding Muslim activities in the country, citing the example of the government-sponsored fund for supporting Islamic culture, education and sciences in Russia.

“But time, it proved out that this fund is being used to pressure Muslims and tame them to take stances in support of the government.”