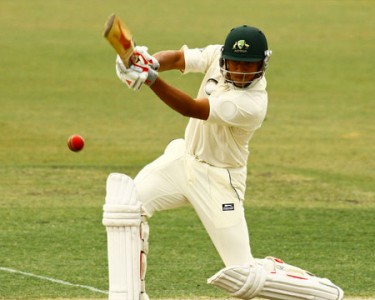 Pakistani-born Khawaja will make history at the SCG on Monday becoming the first Muslim to pull on the Baggy Green.

Celebrated as a role model throughout his rugby league career for enhancing awareness of Islamic Australians, El Masri has had plenty to do with Khawaja in the last two years and praises him as an ideal ambassador for their faith.

He spoke to the 24-year-old on Friday to congratulate him and help prepare him for spotlight he faces over the coming days.

‘It’s just phenomenal. If he can come in there as a shining light, it would be fantastic for everyone, the whole cricket community, the Australian community and especially obviously the Islamic community,’ El Masri told AAP.

‘They’re all very proud, and especially for a kid like Usman. He’s young and he’s got the world at his feet.

‘Above all he’s a really good Muslim too – he follows the religion properly and he’s a quiet, polite kid and everything you want.

‘You want the good people to succeed, and that’s exactly what he is.’

In the same way he helped bring a generation of Lebanese and Muslim Australians to rugby league, El Masri believes Khawaja can prove inspirational for cricket.

He sees Khawaja as an ideal role model for young Muslims, both on the sports field and for life in general.

‘It gives them an inspiration that if someone else can make it, especially from their own culture or religion, that they’ve got a chance at life as well,’ he said.

‘We’re just showing people that give us the opportunity and we will make it’.

‘It shows all the kids that no matter what you are, what you do, if you have a love for sport or a particular thing, and you work hard enough, you will get your chance. You will get a go.

‘Australia is a wonderful country and full of opportunities. If you’ve got a good attitude, you’ll get a go.’

El Masri, a big cricket fan, is planning on getting to the SCG to watch his young friend in action.

NSW cricket and Khawaja originally sounded out El Masri for advice on how to handle playing top level sport while fasting during Ramadan, and the two men have kept in contact ever since.

‘I’ve been really impressed with Usman’s attitude. He’s mature for his age and he’s been killing it for NSW this year,’ he said.

‘I told him it’s going to be a big week and there will be a lot of hype around, but take it in and make sure you’re calm and ready to go when it’s time to go.

‘I’ve been following him throughout and it’s about time he got a call up, so hopefully he can do everyone proud and score some runs.’