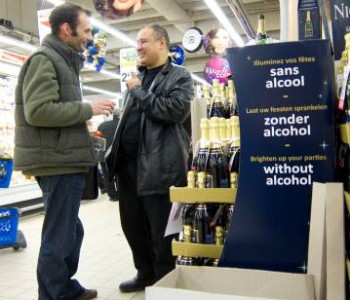 Rashid Gacem, right, presents Night Orient, champagne-type drink that is marketed as halal and with and alcohol percentage of 0.0 per cent, for a tasting to pre-Christmas shoppers at the Cora supermarket in the Parisian suburb Arceuil.

After the halal burger and halal foie gras became a hit with Muslims living in western countries, it is now the turn of champagne – or something vaguely like it – to try.

Trumpeted by its manufacturer as one more way that Muslims can integrate into European society, especially during the holiday season, the drink has been widely derided as a misguided and ultimately demeaning attempt to imitate non-Muslim habits.

“I do hear that,” said Rashid Gacem, one of the partners in Night Orient, which is being marketed as a halal-certified, zero per cent alcohol “festive drink”.

At a tasting in a suburban shopping mall on a snowy Paris afternoon, he passionately disagreed with his critics: “Muslims in Europe wear western clothes, buy western products and have western friends. What makes our halal drink different from that”?

Orient Drinks SPRL, the Belgian manufacturer of Night Orient, is using the Christmas and New Year holiday season for a promotional push for the first time after being launched in 2009. It is also targeting Arab and Muslim countries, including the UAE.

Standing next to a stack of champagne look-alike bottles, with shiny foil tops and gold and blue labels, Mr Gacem and his wife, Nadia, tried to interest Parisian pre-Christmas shoppers in a sip. It showed the difficulty of steering a course between the glamour of champagne and the non-alcoholic safety of fruit juice.

In March, Night Orient was the recipient of the first European halal certificate issued by the Brussels Chamber of Commerce.

But when it comes to an imitation champagne, many Muslim shoppers reacted with disbelief to the halal claim.

“What? Champagne without alcohol? That cannot be,” said one Muslim woman in her 20s who refused to give her name. On tasting it after being reassured she pulled a face. “Bitter,” was her judgment. Mrs Gacem was unfazed. “Mix it with cassis and you’ll have a kir royal, very chic and much sweeter,” she said.

According to Mr Gacem, many Muslims feel pressured to drink something festive on occasions that are traditionally marked with champagne in France, such as “weddings, births or New Year”. Rather than being singled out by drinking water or fruit juice, they could now fully participate with their non-Muslim friends and colleagues, he said.

The global halal food industry is estimated to be worth hundreds of billions of dollars. In France alone, with its approximately five million Muslims, research companies say it is worth more than US$50 billion (Dh183.5bn). Mr Gacem and his Belgian partner, Arnaud Jacquemin, hope to capitalise on the strong expected growth. “We in France are known for our food and drink. We should take advantage of that image,” Mr Gacem said.

The need to protect the image of French gastronomy is taken with upmost seriousness by France’s food and beverage boards, which can prove an obstacle, as Mr Gacem found out last year. Hesitant to speak about the subject, he acknowledged an earlier version of his product ran afoul of the Comité Interprofessionnel du vin de Champagne, the champagne board that staunchly guards the drink’s image.

The board ruled that the drink, originally called Cham’alal, infringed too much on the champagne name and won a court order in January last year to stop it from being sold. Now, Mr Gacem carefully avoids the champagne comparison and even considers the ruling to have been a blessing in disguise. “The first drink was even more brut, much too bitter for most Muslims who like it sweeter. So we changed the taste.”

His partner, Mr Jacquemin, who is not a Muslim, maintains that Night Orient, now marketed in 12 countries, differs from other sparkling grape juice beverages because it uses a unique manufacturing process and comes much closer to the taste of alcoholic drinks. “We produce a very high-level product, both in the way it is packaged and in the way it tastes,” he said.

The appeal of the drink seems to be broader than just for Muslim customers. Christophe Montagne, the food and beverages manager for the Cora supermarket in the Paris suburb of Arceuil where the tasting took place, said he chose to carry Night Orient “because there is an increasing interest in world foods and drinks”. The supermarket is not in a predominantly Muslim area of town and many non-Muslims showed an interest.

“I stopped drinking 10 years ago,” explained Serge Clair, 52. “But for Christmas and New Year I like to join my friends and family in drinking something a bit festive, so I’ll try this,” he explained, putting a bottle into his shopping trolley.

During the tasting, many samplers expressed satisfaction. Others, like Mr Clair, were more dubious, saying “it is more for the fun than for the taste, let’s be honest. Because it does not taste very good.”