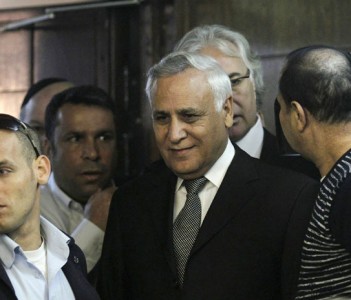 Israeli former president Moshe Katsav was convicted of two counts of rape on Thursday, capping a four-year scandal that shocked the Jewish state and leaves him facing at least eight years in prison.

As a Tel Aviv court handed down the verdict, which also convicted Katsav on charges of sexual harassment, indecent acts and obstruction of justice, the visibly distraught 65-year-old muttered “No, no.”

The ruling comes after a trial that lasted a year and a half and included harrowing accusations, and depictions of Katsav as a sexual predator who routinely harassed his female staff.

The former head of state was accused of twice raping a victim dubbed “Aleph” in his term as tourism minister, and sexually assaulting and harassing two other women during his presidency.

Katsav proclaimed his innocence throughout the investigation into the rape and harassment charges, and even declined a plea agreement that would have seen him admit the lesser accusations, but drop the rape charges and fine him instead of sending him to jail.

He said his accusers had attempted to blackmail him and charged he was the victim of a media witchhunt while pledging to clear his name in a full court trial.

“I am the victim of a lynching,” he said in March 2009. “I have been humiliated, crushed, knocked down, and I suffer.”

But he was forced to resign his post as president, handing the office to former rival Shimon Peres.

On Thursday, presiding Judge George Kara read the verdict before a packed courtroom and accused Katsav of having “engaged in a campaign of vilification against the plaintiffs.”

And he told the former president his decision to nullify the plea deal “was a grave mistake.”

“We believe the plaintiff (Aleph), because her testimony is supported by elements of evidence, and she told the truth,” the judge said.

Prime Minister Benjamin Netanyahu said it was “a sad day for the state of Israel and its citizens,” but he lauded the trial as a sign of the strength of the country’s legal system.

“The court today sent two clear messages: that everyone is equal before the law; and that a woman has full rights and control over her own body.”

The rape charges against Katsav each carry a sentence of between four and 16 years in prison, and he also faces sentencing for charges of sexual harassment, one indecent act, one indecent act with force, and obstruction of justice.

The sentencing is scheduled for January, and the court ordered Katsav to surrender his passport.

Katsav could now appeal to the Supreme Court, but legal expert Moshe Negbi, speaking on Israeli public radio, estimated his chances of success as “zero.”

Thursday’s verdict ends an astonishing fall from grace for the Katsav, who rose from impoverished origins as a child immigrant to assume the nation’s top office.

One of eight children, Katsav arrived in Israel three years after the 1948 war of independence and became the first resident of the Kiryat Malachi tent camp for new arrivals to go on to attend Israel’s Hebrew University.

For years, Katsav embodied the working class kid made good. A member of the right-wing Likud party, he was Israel’s first conservative president, and also the first president of the Jewish state to have been born in a Muslim country.

Katsav emerged a relative moderate after becoming head of state.

He insisted the late Palestinian leader Yasser Arafat had a role to play in the peace process at a time when he was spurned by then-prime minister Ariel Sharon, but also played the protocol card abroad, emphasising Israel’s “right to self-defence” and warning of rising anti-Semitism.

He has been married since 1969 to his wife Gila, who has stood by him throughout the allegations and prosecution, but was not in court on Thursday. The couple have five children.