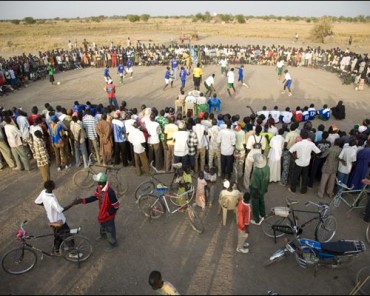 In January, the Western world will welcome a new nation, South Sudan. The Islamic world will not. The coming independence of South Sudan, which holds most of the oil in the country now called Sudan, marks a loss of territory and of wealth for the Islamic world. Worse for Islam and Sudan, more losses may follow in black African areas that refused to become Islamised.

Sudan, Africa’s largest country, is Islamic and Arabic in the north, Christian or animist and black in the south. Following an independence referendum January 9, the black south, an area the size of France, is expected to secede, taking with it 80% of Sudan’s five-billion barrels of oil and thus most of Sudan’s foreign exchange. Under the terms of an existing agreement, the revenue from oil, which is now being piped north through Sudan for export, is being split 50-50 between north and south. But Sudan, which many expect to declare war on South Sudan after the referendum, has good reason to worry that the existing agreement will be scrapped.

For one thing, South Sudan will be building a southeast oil pipeline, through neighbouring Kenya to a port on the ocean. Once built, South Sudanese oil needs not flow north through Sudan, and Sudan will lose its ability to take its share. To add to Sudan’s worry, China – Sudan’s chief financier and the destination for 65% of Sudanese oil exports – has reversed its opposition to South Sudan’s independence and is now bidding to build the new pipeline.

More significantly, the West is hostile to Sudan because of its alliances with Iran and other radical Islamic regimes and because of its atrocities in Sudan’s Darfur region. It is the West that engineered South Sudan’s secession by arranging a referendum under UN auspices and it is the West that has secretly helped arm South Sudan. Last week, Russia joined the club of non-Islamic nations aligned against Sudan, reversing its opposition to South Sudan’s independence and, seeing an opportunity for its own oil industry, bringing combat helicopters to South Sudan to help provide the fledgling country with security. Others aiding South Sudan include Christian Kenya, through which most of its arms arrive, Christian Ethiopia, and Israel, which has played an outsized role in establishing South Sudan.

Once Sudan loses its south, other losses are likely to happen.  Without its oil exports to China, with which it purchases the Chinese arms that have allowed it to counter the rebels in Darfur, Sudan could lose Darfur, also an oil-rich region. And it is already close to losing its Abiyeh region, another black non-Islamic oil producer that wants to join the south – a referendum to decide its fate could take place soon.

Other African states see Sudan’s looming dismemberment as a harbinger of what’s to come. As warned by the president of Chad, Sudan’s neighbour, “we all have a north and south. If we accept the breakup of Sudan, the domino effect will be inevitable and it would be a disaster for the continent.”

Because the stakes for Sudan and Islam are so high, many expect Sudan to reject the referendum results and – with the help of Iran and other allies – to try to keep South Sudan by force. The clash of civilizations between Islam and the west will then open a new chapter.