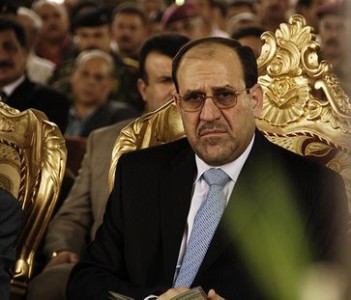 Iraq’s parliament approved Prime Minister Nuri al-Maliki and his new government on Tuesday, nine months after an inconclusive election left politics in limbo and delayed investments to rebuild the country after years of war.

Highlighting the ethnic and sectarian divides that pervade the war-ravaged country, parliament had to postpone the vote on Monday after last-minute factional disputes and political horse-trading over posts delayed the government’s formation.

In a speech to parliament before lawmakers approved his government plan, Maliki acknowledged the rough road Iraq’s fledgling democracy took during the nine months of squabbling between political factions.

“I do not say that this government, with all its formations, satisfies its citizens’ aspiration, nor the political blocs’, nor my ambition, nor any other person’s ambition, because it is formed … in extraordinary circumstances,” he told lawmakers.

Former Prime Minister Iyad Allawi, who failed to gain enough support for a parliamentary majority after his cross-sectarian Iraqiya bloc won the most seats, told lawmakers his Sunni-backed coalition would participate fully in the government.

“We as the Iraqiya bloc declare our full support for this government,” Allawi said. “Iraqiya will play an active, productive and cooperative role.”

Maliki has yet to decide on permanent choices for some positions, including sensitive security-related ministries such as defence and interior.

“The deal the parties worked out is rather elaborate but the critical thing is that they were able to get to this point through peaceful negotiations without any return to large-scale violence,” said Shadi Hamid, director of research at the Brookings Doha Centre.

“That said, power-sharing deals like this one tend to be quite fragile and so the next few months will present a crucial test for the … rival blocs.”

International investors are watching developments in Iraq’s energy sector with great interest as the country embarks on an ambitious programme to exploit its vast oil resources and rebuild its neglected and damaged infrastructure.

For international oil companies, Shahristani’s continued control over the oil sector will be seen as assurance that contracts he agreed will be honoured in the absence of formal guarantees, since Iraq still lacks a new hydrocarbons law.

The appointment of Luaibi could also be seen as a sign of continuity for companies that signed deals with Iraq to develop its oilfields, which are among the largest in the world but suffered from a lack of investment during decades of war and international economic sanctions.

A power-sharing deal on Nov 10 between Shi’ite, Sunni and Kurdish blocs put Maliki on track for a second term as prime minister. The pact returned Kurd Jalal Talabani as president and made Osama al-Nujaifi, a Sunni, parliament’s speaker.

Allawi, a secular Shi’ite, has said he will join the government as head of a new national strategic policy council.

Allawi’s decision, announced on Sunday after weeks of wavering, could soothe worries about renewed sectarian violence.

After decades of war and sanctions, and 7-1/2 years after a U.S.-led invasion that toppled Sunni dictator Saddam Hussein, Iraq is seeking to rebuild its shattered infrastructure. The country relies on oil for 95 per cent of federal revenues.