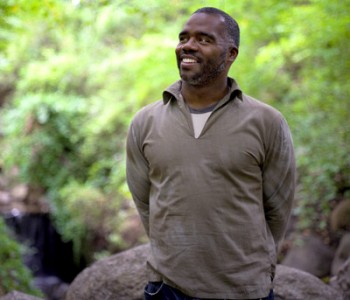 Fox News, Republican politicians and conservative pundits can deny global warming and the need for greener living all they want, but one thing is for certain: it’s not faith that’s causing the blindness, but wilful ignorance.  In the brand-new book Green Deen: What Islam Teaches About Protecting the Planet, written by a Muslim-born policy advisor in the New York City’s Mayor’s Office, the connection between faith and environmentalism is not only apparent, but also fundamental in understanding the relationship we have between the personal and environmental/communal.

Green Deen is not so much a book about Islam as it is a book about environmental living and policy from a Muslim perspective.  Its message and practical applications are really nothing new.  What sets it apart is its Islamic perspective, which gives a breath of fresh air to the portrayal of one of today’s most misunderstood religions.

In a time when many associate Islam with terrorism and oil, not many understand the long history of environmentalism that is inherent in the Qur’an and Islamic teachings.  Practicing Muslims are taught to look at themselves as stewards of the Earth.  As Green Deen’s author, Ibrahim Abdul-Matin wrote, “The Earth is a mosque.”  He starts the book by defining the word Deen not as a religion, but as a “way of life” in Arabic, a system of living and interpreting the world as a way to arrive at peace with it.  Add the colour green to it, and Green Deen was written as a practical approach to merge personal faith with the common cause of environmentalism:

“Green Deen means understanding that God created us directly from the Earth and that we must do all that we can to take care of it, protect it, and manage all of its bounty in a sustainable way.”

From his perspective, everyone, Muslim and non-Muslim alike, can create a green Deen because everyone can contribute to how we take care of the Earth in our public and private lives.

Green Deen is organized into four parts: Waste, Watts, Water, and Food.  As Abdul-Matin explains, these are four components central to defining how well societies function:

“Waste management and energy delivery is essential to the every-day functioning of a city or society.  Water and food is vital to the survival of humanity.”

Abdul-Matin argues “over-consumption and [targeted] corporate abuse as the problem.  Both capitalism and socialism define your value as a human being on what you can make or create or destroy or waste or consume.”  Inherent in each section- Waste, Watts, Water, and Food- are six Islamic teachings that are central to living a Green Deen:

Tawhid (Oneness): the understanding that everything comes from Allah / God / Supreme Being.  To those who don’t believe in God, this can be less about religion or spirituality and more about the idea that “everything emanates from the same source… the universe is aglow with continuity” and of interconnectedness and continuity among all living things and their systems / environments.

Ayat (Sign): the ability to see everything in the natural world as a sign of Allah / God / Supreme Being / interconnectedness.

Khalifah (Steward): the responsibility we have to protecting the natural world and managing it in a sustainable way.

Amana (Trust): the duty we have to acting as stewards of the natural world.  Just like we can destruct the Earth more than any other creatures, we can also take care of it with a certain diligence that doesn’t exist in the animal kingdom.

Adl (Justice): simply, treating the world with justice, first by recognizing that humans have a negative impact on Earth, and then by reducing that impact as much as possible.

Mizan (Balance): understanding that the world exists in a natural balance, which thrown off by pollution, consumption, exploitation, etc., needs to be restored.

While some of quotations that Abdul-Matin sources from the Qur’an can be a little far-reaching, the great strength of this book is not so much that, but the practical application and examples he brings up as to how anyone, regardless of faith, can incorporate environmental balance into their daily lives.  The arguments can easily be applied to other faiths, and each one asks people to assess their own relationship with environmentalism with questions such as “How do you relate to trash, to waste, to consumption?”  With regards to energy consumption, Abdul-Matin creatively divides it between sustainable resources- solar and wind- as “Energy from Heaven” and traditional sources- gas, coal, oil- as “Energy from Hell.”  He also uses the Prophetic tradition of eating from the plate closest to you to support his argument for buying and eating local produce.

Of particular note is that Abdul-Matin’s examples of actively green Muslims all take place on the American continent, which speaks volumes to show that Islam can be an American and Western lifestyle, separate from political discourses and struggles in the Middle East.  When asked about the book’s lack of focus on American reliance on the Middle East for fossil fuels, he replied, “That’s a deep part of our Muslim tradition that we need to move away from.  But I’m not from Saudi Arabia.  I’m American, and I wanted to speak to my own people.”  Abdul-Matin describes it as the first “post-9/11” book about Muslims, meaning it doesn’t mention that day, the War on Terror, and what it all means for American Muslims today.  Rather, he wanted to write a book that looks at practicing Muslims past 9/11 and working to contribute to a common American cause.

The book’s writing reads easily, and it offers something to readers on all levels of Islamic and environmental knowledge, be it a discussion of the basics or insights and advice for looking at the two in new ways.  It doesn’t offer all the answers; instead it “was designed to be the first step in this conversation, and my hope is that much more qualified scholars will join in and take this further.  To see if we can be a force for good- an example to ourselves first and foremost.”