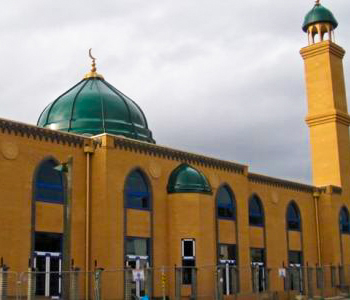 Three people have been arrested and released on bail by police investigating an arson attack on a Stoke-on-Trent mosque on December 3. Three males aged 16, 18 and 19 and an 18-year-old female, were arrested in connection with the fire at the newly build City Centre Mosque which is not expected to open now until next summer.

The 16 year old male has been released and will not face any further action.

The blaze, which is being treated as a ‘racist attack’ or a case of misbehaviour, started at around 6.30am after smoke was seen coming from the building. It is believed the offenders broke into the building in Hanley before connecting a hose pipe to the gas supply of an empty house next door and feeding it through a window into the mosque.

Rubbish was then set alight on the ground floor as the arsonists tried to trigger an explosion.

Mosque Trustee Rana Tufail told The Muslim News the incident should be described as a “terrorist attack”.

“This is not just a case of an Islamophobic or racist attack it’s a terrorist attack. They wanted to blow up the whole mosque. People from the community living near the mosque could have been killed or severely injured.”

On August 14 the Mosque’s newly installed windows and doors were broken. Tufail said the fact that neither have been replaced was fortunate.

“They [the perpetrators] couldn’t fill the property with gas; they couldn’t because the windows and doors were not replaced.” Tufail said the emerging presence of far-right groups like the English Defence League (EDL) in Stoke-on-Trent fuels community tensions.

“They wanted to have a demonstration outside the mosque but the police diverted them to another area. Their visible campaign against Muslims would incite some people.”

Speaking to The Muslim News Deputy Leader of the Liberal Democrats Group and Hanley West and Shelton Councillor Zulfiqar Ali said there is a “strong possibility” of the involvement of far-right groups.

“I have full confidence in Police who have assigned 25 detectives to investigate this attack on Mosque and am sure would reach to a conclusion,” Ali said.

In a statement to The Muslim News Chief Inspector Wayne Jones said, “This is a complex and detailed investigation which has a number of very active lines of enquiry. We now have to carefully and methodically review the evidence already recovered, which includes hours of CCTV coverage from the area, to ensure all possible witnesses are found to support the investigation.”

Police, who have handed the Mosque back to its committee, have begun an around the clock and “highly visible patrols across the city.”