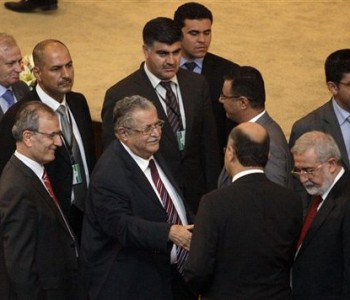 Iraq’s parliament on Saturday lifted a ban on three Sunni Muslim politicians barred from running in national elections last March after being accused of having ties to Saddam Hussein’s ousted regime.

The vote brings Iraq closer to a unity government and an end to months of political turmoil that began when the March 7 election failed to produce a clear winner. It paves the way for broader Sunni participation in the emerging government, headed by Shiite incumbent Prime Minister Nouri al-Maliki.

Parliament voted 109-61 to allow former lawmaker Saleh al-Mutlaq and two other Sunnis to return to political jobs. Al-Mutlaq, an al-Maliki critic and member of the Sunni-backed Iraqiya political coalition that won the most seats in the March vote, is expected to take a government post instead of re-joining parliament.

Iraqiya spokesman Haidar al-Mullah said Saturday’s decision marked a major step toward assuring Sunnis that they will not be sidelined in the new Shiite-dominated government. The two Muslim sects have fought bitterly for power after Iraq’s majority Shiites took control of the government that Sunnis ruled under Saddam.

“What has happened today is the starting point for more national reconciliation,” al-Mullah said.

Al-Mutlaq was the most prominent of hundreds of candidates who were barred from the elections after a Shiite-led panel said they were loyalists to Saddam’s outlawed Baath Party. Their blacklisting, part of a controversial process to weed Baathists from government, was seen as a thinly veiled attempt to bar Sunnis from returning to power.

Ahmed Chalabi, the head of the de-Baathification panel, said lifting the ban on al-Mutlaq and the other politicians was made possible by a decision last month by Iraq’s political parities to abolish the vetting commission entirely within two years.

Al-Maliki said Saturday he plans to announce his new Cabinet on Monday.