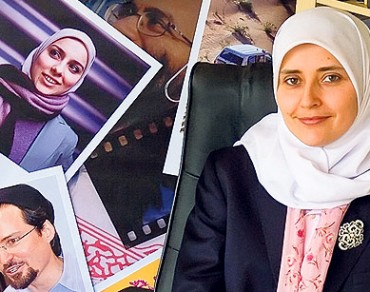 Journalist Sarah Joseph, the founder and editor of Emel magazine.

Courage and determination is what it takes to be a Muslim, especially in the aftermath of the Sept. 11 attacks. Believers in Islam have long been depicted stereotypically in political and religious debates.

Tired of responding to the horrors of Sept. 11 for a year, British entrepreneur and journalist Sarah Joseph decided to stop explaining what Muslims are “against” and to start explaining what they are “for.” Such an urge ultimately paved the way for Emel magazine.

Though she grew up in a Catholic family, her father was an accountant and her mother the owner of a modelling agency, Joseph adopted Islam at 16.

Her magazine features interviews with famous personalities –– among them British Prime Minister David Cameron; Archbishop of Canterbury Rowan Williams; Yusuf Islam, previously known as Cat Stevens; the Anglican bishop in Jerusalem; and many others –– food, fashion, interior design, gardens and finance. It is a revolutionary publication based on the idea of, what Joseph calls, a “Muslim lifestyle.”

“Rather than describing Islam and Muslims as two-dimensional political or religious caricatures, we said that Islam was a whole and complete way of life that influenced every aspect of one’s living –– our art, our architecture, our gardens, our finances can all be expressions of our faith,” she explained in an interview with Sunday’s Zaman. “In many ways, I can see that it created a paradigm shift in Muslim discourse and acted as a catalyst for other work.”

Joseph stresses that faith must be present throughout the believers’ lives instead of being just about prayer and religious clothing. The idea of launching the magazine occurred to her during a vacation in 2000. She felt the urge to start the magazine when she could not find anything to read in English that would put forward a positive and inspiring Muslim way of life, featuring Islam outside of dogma and politics.

“The majority of Muslims want to just get on with life; improve their condition and that of their families and communities. We had become sensationalized and after 9/11 we were viewed as a suspect community. But the Muslim reaction was always defensive and I felt we needed to tell people what Muslims actually stood for and how Islam can make a contribution to the common good of all in society,” Joseph explains.

She also explained that they have four C’s as the magazine’s principles: confidence, contribute, common good and connectivity. The magazine does not only address Muslim readers but targets non-Muslims as well. Politicians, journalists, media executives, royalty and the ordinary British public are among the non-Muslim readers of Emel. “Over 15 per cent of our readers are not Muslims,” Joseph added.

The editor’s mother, Valerie Askew, successfully runs a modelling agency, which launched the career of internationally well-known models, including Naomi Campbell, Sadie Frost and Catherine Bailey. As much as she thinks that the fashion industry had very little depth, Joseph also notes that she learned a lot. “I mixed with a lot of different people, learnt that true beauty comes from within, and learnt not to judge things by how they looked. All of this shaped me as a person. I also saw the inside of a business –– how it was run, saw my mother as a dynamic person and saw the pictures for magazines being created.”

From practicing Catholic to influential Muslim

Joseph was born into a family with a variety of Christian traditions and she was a confirmed Catholic before she adopted Islam. As a practicing Catholic, she even considered taking holy orders and entering the Church as a nun, inspired by Mother Theresa of Calcutta.

She said it was not easy for her to adopt Islam. While her brother converted to Islam to marry a Muslim woman, which she calls a “conversion of convenience,” Islam did not have a major effect on his life; however, Joseph said Islam “profoundly changed” her life.

“This was a very painful experience, and I had no desire to take up another religion. I did not lose faith in God, though, and I continued to pray and fast. Slowly, I realized that the word Islam meant to self-surrender your life unto God, which was genuinely all I had ever wanted to do,” she explained.

As a hardworking woman, her work has made her among the most influential 500 Muslims, a list produced jointly by the Royal Strategic Studies Centre in Jordan and Georgetown University in Washington. “I think I was included on the list because in 2003 we created a revolutionary idea –– Muslim lifestyle,” she said.