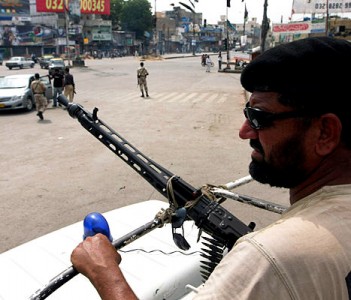 German officials said the pre-emptive raids, conducted under German anti-Nazi laws of association, were aimed at uncovering unconstitutional or separatist acts and not part of an international terror hunt.

The raids targeted the Wahhabist Islamic Cultural Centre of Bremen, on the North Sea, along with a group calling itself Invitation to Paradise in two small northwest German cities. Invitation to Paradise’s leader has called for Sharia, or Islamic law, to prevail one day but has specifically opposed using violence to impose it.

While some experts say police overreacted in conducting the raids, German officials have come under great pressure from local media and citizen groups to respond to Wahhabi organizations that appear to resist joining mainstream German society.

“These groups are a problem for integration, even maybe for radicalization, though not necessarily for violent jihad. They are very orthodox and like to be separate but are not preaching but usually condemning violence,” says Alexander Ritzmann, a former Berlin member of parliament now with the European Foundation for Democracy in Brussels. “The problem is that some Jihadis in Germany from before identified themselves as Salafi.”

Germany has been on high alert for possible terror attacks since mid-November. The Reichstag parliament building was partially closed to tourists for two weeks following a phone call from a disaffected South Asian Jihadist who warned that Wahhabi militant groups were planning to attack high-profile targets in the nation.

Authorities said yesterday’s raids were unrelated to the phone warning.

The German Interior Ministry said it was investigating efforts by radicals to overthrow the government on theological Islamic grounds. In a statement issued Tuesday, the ministry said that, “For a well-fortified democracy, it is necessary and demanded, without waiting for the jihad to occur in the form of armed struggle, to take action against anti-constitutional organizations.”

A leader of Invitation to Paradise, Pierre Vogel, has been a lightning rod in Germany for some time now. He’s a German convert to Islam who appears on numerous TV shows to defend the concept of Sharia.

Mr. Ritzmann, the former German parliamentarian, argues that the zeal of the German police should be more in line with the goals of German intelligence, which may be uneasy with high-profile raids that are designed to placate political pressure.

“The police may make some of the popular leaders into martyrs if the state is now going after them,” he says. “It means inside the mosque that everything the Islamic leaders say to them about not being accepted in German society appears to be true.”

After a car bomb in Stockholm carried out by a disaffected Islamist from Iraq named Taimour Abdulwahab al-Abdaly, several German politicians called for tighter visa restrictions. After yesterday’s raids, other officials called for a quick and total ban on radical Islamic groups. German police say the raids were unrelated to the Stockholm incident.