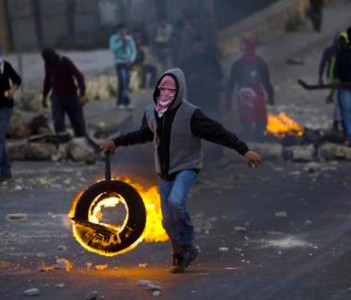 The United States will continue to push towards direct peace talks, as a Palestinian state achieved through negotiation is inevitable, U.S. Secretary of State Hillary Clinton said Friday.

In her speech before Brookings Institution’s Saban Centre for Middle East Policy’s seventh annual forum in Washington, Clinton detailed the Obama administration’s plans to move the Middle East peace process forward in the wake of the collapse of direct peace talks.

Clinton said that the United States is serious about pushing forward a peace agreement and laying the foundations for a future Palestinian state.

“We will deepen our support of the Palestinians’ state-building efforts, because we recognize that a Palestinian state, achieved through negotiations, is inevitable,” Clinton said, adding that “the long-term population trends that result from the occupation are endangering the Zionist vision of a Jewish and democratic state in the historic homeland of the Jewish people.”

Clinton’s speech marked her first Middle East policy address after the United States abandoned efforts this week to persuade Israel to stop new construction of Jewish settlements, a step the Palestinians said was essential if they were to resume direct peace talks which collapsed just weeks after their September launch.

The breakdown was a setback for President Barack Obama, who has made Middle East peace a key U.S. policy goal, and sowed tension between Washington and its most important Middle East ally as both face challenges including Iran.

U.S. Middle East peace envoy George Mitchell will head back to the region next week, and Clinton said diplomacy would now concentrate on a range of “core issues” — all of which have proved difficult to resolve.

These include borders and security, settlements, water, refugees, and Jerusalem itself, which Israel says is its capital but which the Palestinians also hope will serve as the capital of their future independent state.

Clinton said that the Obama administration aims to focus on core issues in the near future, including borders and security, settlements, water and refugees, and on Jerusalem.

“The position of the United States on settlements has not changed and will not change,” said Clinton. “We do not accept the legitimacy of continued settlement activity. We believe their continued expansion is corrosive not only to peace efforts and the two-state solution, but to Israel’s future itself.”

Clinton also criticized the two parties, who had “not yet made the difficult decisions that peace requires. Like many of you, I regret that we have not gotten farther, faster.”

“Israeli and Palestinian leaders should stop trying to assign blame for the next failure and focus instead on what they need to do to make these efforts succeed,” she said.

Clinton emphasized U.S. commitment to the peace process and that its goal was “eventually restarting direct negotiations.”

“In the days ahead, our discussions with both sides will be substantive, two-way conversations, with an eye toward making real progress in the next few months on the key questions of an eventual framework agreement.”

Defence Minister Ehud Barak spoke before the forum following Clinton, and stressed that Israel understood that a two-state solution was the only option.

“The world is changing before our eyes and is no longer willing to accept, even temporarily, our continued control over another people. Two states for two peoples is the only true path of Zionism today,” Barak said.

“In spite good faith efforts, together with the Administration we were unable to launch the second moratorium for ninety days,” Barak said, adding “that shouldn’t cause us losing sight of what needs to be done.”

Earlier on Friday, U.S. State Department spokesman P.J. Crowley told reporters that the Middle East peace process had not unravelled, despite the failure of the Obama administration to keep direct talks between Israel and the Palestinians alive.

“I would say we’re definitely not back at square one,” Crowley said. “We think, through the many, many conversations and work that we’ve done over the course of almost two years, we’ve built a foundation for what lies ahead.”

The U.S. and Israel announced earlier this week that negotiations between Washington and Jerusalem over a new freeze on West Bank settlement construction in exchange for a set of U.S. guarantees had hit a dead end.

The Palestinians have said that they would not negotiate directly with Israel while settlement construction continues.

The Americans may push for a renewal of U.S.-supervised indirect peace talks.

U.S. officials hope to make progress on security issues and setting a final border between Israel and a future Palestinian state in separate talks with the two sides, paving the way for resumption of direct negotiations and an ultimate peace deal.

Palestinian Prime Minister Salam Fayyad, all of whom were in Washington to take part in Saban Forum meetings.

Emerging from the State Department after his talks with Clinton, Erekat blamed the Israeli government for the breakdown in talks and said the Palestinians would continue to consult with the U.S., the UN, the European Union and Arab League on how to proceed.

“They are alone responsible for the derailment of the peace process,” Erekat told reporters. “The Israeli government had a choice between settlements and peace and they chose settlements.” He said the Palestinian position was unchanged and offered no predictions as to what might be next.