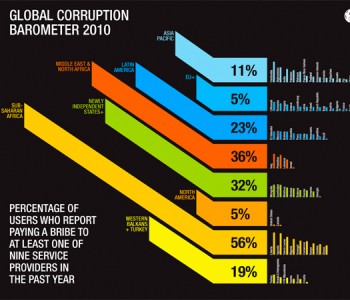 One person in four worldwide has paid a bribe during the past year, according to a study released on Thursday to mark International Anti-Corruption Day.

The study, by the Berlin-based non-governmental agency Transparency International, focuses on small-scale bribery and was put together from polls conducted among more than 91,000 people in 86 countries and territories.

In the past 12 months, one in four paid a bribe to one of nine institutions, such as health, education or tax authorities, according to the 2010 Global Corruption Barometer.

But it was the police who proved most corrupt, according to the study which reported that 29 per cent of those having dealings with police said they had paid a bribe.

Worldwide, sub-Saharan Africa was the region reporting the greatest incidence of bribery with more than one person in two saying they had made such payments to officials in the past 12 months.

The Middle East and North Africa was the next most corrupt region with 36 per cent of people there reporting having paid a bribe.

Countries topping the list for reported bribe payments over the year were Afghanistan, Cambodia, Cameroon, India, Iraq, Liberia, Nigeria, the Palestinian territories, Senegal, Sierre Leone and Uganda, where more than one person out of two said they had handed out financial sweeteners to officials.

Nearly half of respondents said they paid to avoid problems, while a quarter said it was meant to speed up procedures. Lower income earners reported paying more bribes than the better paid.

“The fall-out of the financial crises continues to affect people’s opinions of corruption, particular in North America and Western Europe.

Institutions everywhere must be resolute in their efforts to restore good governance and trust,” Huguette Labelle, chair of Transparency International, said.

The study, the seventh on the matter by Transparency International since 2003, this time involved a greater number of countries, including for the first time China, Bangladesh and the Palestinian territories.

Polling, mostly by the Gallup Institute, was conducted between June 1 and September 30.

“The message from the 2010 Barometer is that corruption is insidious. It makes people lose faith. The good news is that people are ready to act,” Labelle said.

“Public engagement in the fight against corruption will force those in authority to act – and will give people further courage to speak out and stand up for a cleaner, more transparent world.”

The UN established International Anti-Corruption Day in 2003 to raise awareness of graft and promote the global fight against it.