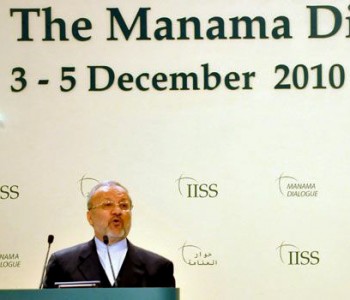 Iran cautioned the Muslim world against falling prey to American machinations and dismissed allegations it is building a nuclear weapon.

Speaking on the second day of the International Institute for Strategic Studies Regional Security Summit at the Ritz-Carlton Saturday, Iranian Foreign Minister Manouchehr Mottaki blamed the American presence in the region for its instability.

“They bombed Afghanistan (after 9/11) and then became so arrogant that they did not even feel the need to take the permission of the United Nations to bomb Iraq. They killed hundreds of innocent people in Iraq — people who had committed no crime,” he said in Farsi.

He accused the US of spreading lies and deception, citing the recent WikiLeaks controversy, and claimed that Iran was a friend to all Arab and Muslim countries in the region. “We are happy when Saudi Arabia flourishes. We are happy to note that Bahrain has become an important center of international banking. Why should we not be happy? These are our Muslim brothers,” he said while driving his point home.

He denied claims that Iran was building a nuclear weapon and claimed the Americans were spreading lies.

“We are not. And let me clarify that throughout our 700 years of history and culture we have not used force against any of our Arab neighbors … We cannot even think of it because our neighbors are Muslims.”

He said Muslim countries must not submit to pressures by outsiders that divide them and create instability and create divisions among friends in the region. “In the region it has been proven that foreign intervention creates unhealthy rivalries between neighbors.”

Iranian nuclear power, he said, will benefit the entire Muslim world. “Muslims must be happy to see other Muslims becoming powerful … Our power is your power, and your power is ours,” he told the high-powered gathering. “We must not allow the Western media to tell us what to think of each other.”

According to him, things have not changed under US President Barack Obama. “We see the same policies are in motion that were started by (George W.) Bush. The American people had given Obama the mandate to stop the wars. He did not do so and was therefore punished in recent elections,” said Mottaki.

He said Iran is fully aware of the dangers of building nuclear weapons. “A nuclear bomb does only one thing: it destroys everything. Why will we go for such a weapon? Look at our history and show one instance where we have used force? We never sought weapons of mass destruction. Even when we were attacked by chemical weapons in the 1980s we did not think of building such weapons. These chemical weapons were by the way supplied by the American and European governments to Iraq.”

As recently as Thursday, the UN International Atomic Energy Agency restated that Iran was not fulfilling its obligations under the Nuclear Non-Proliferation Treaty to which it is signatory. The UN imposed a fourth round of sanctions on Iran in June for its continued noncompliance with the international watchdog group.

“It has been six months since they introduced the sanctions, and if they need more time in order to see if these sanctions worked they can wait a longer time. The sanctions have no impact on us,” the 57-year-old Iranian career diplomat maintained.

According to one report, Mottaki’s remarks disputed comments by US officials ahead of Monday’s nuclear talks between Iran and major powers that US and UN sanctions on Iran have taken the Islamic republic’s regime by surprise.

William Burns, the top US negotiator for the so-called P5+1 talks with Iran, said the sanctions were “sharply” isolating Iran from the global financial system.

“Iran may be losing as much as $50 to $60 billion in potential energy investments, along with the critical technology and know-how that comes with them,” he said on Wednesday.