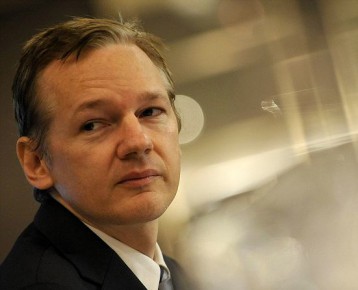 The financial system is bracing for a scandal as Wikileaks founder Julian Assange has revealed the next target of his website will be a major US bank.

Assange hasn’t said what bank will be exposed or when the reveal will happen, but he compared the information the documents contain with the Enron scandal.

‘It will give a true and representative insight into how banks behave at the executive level in a way that will stimulate investigations and reforms, I presume,’ he told Forbes magazine.

‘You could call it the ecosystem of corruption,’ Assange added.

‘But it’s also all the regular decision making that turns a blind eye to and supports unethical practices: the oversight that’s not done, the priorities of executives, how they think they’re fulfilling their own self-interest.

The American government is currently in damage control or the most recent document dump.

U.S. Secretary of State Hillary Clinton will be the first American politician to face the possible wrath of world leaders humiliated in secret documents released by the whistleblowing website.

Mrs Clinton has set off on a potentially embarrassing tour of central Asia – where she will doubtlessly share awkward moments and perhaps be called upon to explain disclosures in the published documents.

She is travelling to a summit which will also be attended by Russian president Dmitry Medvedev and German chancellor Angela Merkel.

And she will end the four-nation tour in Bahrain by delivering a speech to Middle East leaders from many of the countries whose confidences were compromised by the leaks.

Mr Medvedev was portrayed as being the Robin to Russian Prime Minister Vladimir Putin’s Batman in the Kremlin, and his country was described in the leaked cables as being a ‘virtual mafia state’.

Mrs Merkel was portrayed as an unimaginative leader who ‘avoids risk and is rarely creative’.

Mrs Clinton has already apologised to Russia and Germany for the leaks, but aides fear it could still be ‘uncomfortable’ for her during the trip.

Despite the obvious damage to international relations that the WikiLeaks dossier has caused, Mrs Clinton said she was ‘confident’ that U.S. partnerships would withstand the diplomatic crisis.

She even managed a joke about the crisis, saying that one senior U.S. diplomat had told her: ‘Don’t worry; you should see what we say about you.’

The Obama administration launched a full-bloodied assault on Wikileaks just hours after the whistle-blowing website plunged the U.S. into an unprecedented diplomatic crisis.

As the White House began a frantic damage limitation exercise, Mrs Clinton said the government was taking ‘aggressive steps to hold responsible those who stole this information’.

In a defiant press conference in Washington, she said: ‘This disclosure is not just an attack on America’s foreign policy interests. It is an attack on the international community: the alliances and partnerships, the conversations and negotiations that safeguard global security and advance economic prosperity.’

In a co-ordinated retaliation by the Obama administration, the Attorney General launched a criminal investigation into the WikiLeaks dossier – the biggest intelligence leak in history.

Eric Holder pledged to prosecute those behind the publication of the confidential documents.

He said: ‘To the extent that we can find anybody who was involved in the breaking of American law, they will be held responsible.’

On Capitol Hill, the reaction was less guarded.

Senator Joe Lieberman, chairman of the Senate homeland security committee, said those responsible for the ‘outrageous, reckless and despicable’ leaks are going to have blood on their hands’.

He urged the US to do everything it could to shut down the whistle-blowing website.

According to Peter Hoekstra, the senior Republican on the House intelligence committee, the documents contained a ‘whole number of time bombs’ and he described the likely breakdown in trust between the US and other countries as a ‘catastrophic issue’.

Pete King said the website ‘posed a clear and present danger to the national security of the United States.’

The WikiLeaks dossier revealed U.S. embassy cables exposing everything from secret discussions on bombing Iran to ‘inappropriate behaviour’ by a member of the British Royal Family.

The release of the dossier prompted President Obama to order U.S. agencies this morning to urgently review their safeguards on classified information.

But it is likely to be Mrs Clinton who will be forced to bear the brunt of the international backlash.

The Secretary of State leaves Washington today on a four-nation tour of Central Asia and the Middle East – regions that figure prominently in the leaked documents.

Among the most damaging revelations is the file that showed the U.S. had ordered a spying operation on diplomats at the United Nations, in apparent breach of international law.

U.S. staff in embassies around the world were ordered by Secretary of State Hillary Clinton to obtain frequent flyer numbers, credit card details and even iris scans, fingerprints and DNA of foreign officials.

WikiLeaks ignored a last-minute warning from the Obama administration that going ahead with publication of the first tranche of 250,000 classified documents would put ‘many lives at risk’.

In a Twitter statement the organisation said it had suffered a distributed denial of service (DDOS) attack – i.e. an effort to make the site unavailable to users, usually by flooding it with requests for data.

But the damaging disclosures were already being published by international media.

Experts warned the revelation of repeated private calls from King Abdullah of Saudi Arabia for the United States to attack Iran to destroy its nuclear programme and ‘cut off the head of the snake’ risked destabilising the Middle East.

President Barack Obama is revealed in one damaging cable as having ‘no feelings for Europe’ and preferring to ‘look East rather than West’.

Others reveal withering assessments of the U.S. of a long list of world leaders.

The U.S. branded France’s President Nicola Sarkozy an ’emperor with no clothes’ with a ‘thin-skinned and authoritarian personal style’, Russia’s Prime Minister Vladimir Putin as an ‘alpha dog’ and Iran’s President Mahmoud Ahmadinejad as ‘Hitler’.

Silvio Berlusconi of Italy’s ‘wild parties’ were described by U.S. diplomats, who called him ‘feckless, vain, and ineffective as a modern European leader’.

Another dispatch from Rome recorded the view that he was a ‘physically and politically weak’ leader whose ‘frequent late nights and penchant for partying hard mean he does not get sufficient rest’.

Detailed in another document was Libyan President Muammar Gaddafi’s fondness for a ‘voluptuous’ Ukrainian blonde he apparently employs as a ‘nursing sister’ and who accompanies him everywhere.

German Chancellor Angela Merkel is damned as ‘risk aversive and rarely creative’, while Dmitry Medvedev of Russia is a ‘pale, hesitant’ figure who ‘plays Robin to Putin’s Batman’.

The White House has slammed the decision to publish the information.

Spokesman Robert Gibbs said President Obama supports open and accountable government, but the WikiLeaks was being ‘reckless and dangerous’.

‘By releasing stolen and classified documents, WikiLeaks has put at risk not only the cause of human rights but also the lives and work of these individuals,’ Gibbs said. ‘We condemn in the strongest terms the unauthorized disclosure of classified documents and sensitive national security information.’

Today desperate efforts were being made on both sides of the Atlantic to shore up the special relationship in the wake of the revelations about the U.S. assessment of Britain.

There were no further details of the claims concerning the member of the British royal family or of the requests for intelligence about MPs, expected to emerge in the days ahead.

Criticism of British operations in Afghanistan were however said to be ‘devastating’, putting the U.S.-UK alliance under strain.

Remarks concerning Mr Cameron, who was said to have been deemed a ‘lightweight’ by U.S. President Barack Obama when the two first met, were described as ‘serious political criticisms’.

The State Department released a letter from Harold Koh, its top lawyer, to WikiLeaks founder Julian Assange and his attorney telling them that publication of the documents would be illegal and demanding that they stop it

‘They were provided in violation of U.S. law and without regard for the grave consequences of this action,’ he said.

In London, the Foreign Office also condemned the leaks and was forced to insist they would not undermine the special relationship between the U.S. and UK.

‘We condemn any unauthorised release of this classified information, just as we condemn leaks of classified material in the UK,’ a spokesman said.

‘They can damage national security, are not in the national interest and, as the U.S. have said, may put lives at risk. We have a very strong relationship with the U.S. Government. That will continue.’

Italy’s foreign minister Franco Frattini said the files would ‘blow up the relationship of trust between states’, adding: ‘It will be the September 11th of world diplomacy.’

The U.S. says it has known for some time that WikiLeaks held the diplomatic cables. No one has been charged with passing them to the website, but suspicion focuses on Welsh-born U.S. Army Pfc. Bradley Manning, an intelligence analyst arrested in Iraq in June and charged over an earlier leak.

He told a fellow hacker he would come into work with a CD labelled ‘Lady Gaga’ and downloaded intelligence in ‘possibly the largest data spillage in American history’.

Manning is said to have told a fellow hacker: ‘Information should be free. It belongs in the public domain.’

Intended to be read by officials in Washington up to the level of the Secretary of State, the cables are generally drafted by the ambassador or subordinates.

They are marked ‘Sipidis’ – secret internet protocol distribution – and are classified at various levels. The most sensitive are marked ‘SECRET NOFORN’ [no foreigners].

Wikileaks claimed last night it had come under attack from a computer-hacking operation ahead of the release of secret U.S. documents.

‘We are currently under a mass distributed denial of service attack,’ it said on its Twitter feed.