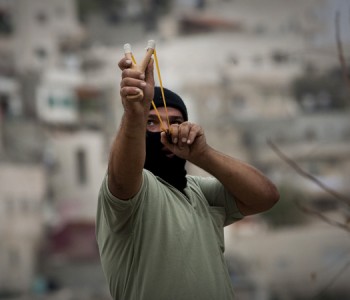 Future historians will no doubt argue over the precise moment when the Arab-Israeli peace process died, when the last glimmer of hope for a two-state solution was irrevocably extinguished. When all is said and done, and the forensics have been completed, I am sure they will conclude that the last realistic prospect for an agreement expired quite some time before now, even if all the players do not quite realise it yet: anger and denial are always the first stages in the grieving process; acceptance of reality only comes later.

There are growing signs, however, that the realisation is beginning to dawn in Ramallah, Tel Aviv and, most strikingly, Washington, that the peace process, as currently conceived, may finally be dead.

Washington: hoping for a miracle?

We should begin in Washington, in the aftermath of the seven-hour marathon meeting between Hillary Clinton, the US secretary of state, and Binyamin Netanyahu, the Israeli prime minister, in New York last week.

To view the apparent results of that meeting in context, one would have to recount the gargantuan structure of US military, intelligence, economic and diplomatic support to Israel, painstakingly constructed over many decades, for which there would not be space to describe it all here – if indeed one had the knowledge to do so.

The edifice is so extensive, including direct military aid, weapons transfers, access to US emergency weapons stocks, pre-positioning of US military materiel in Israel, US investments in Israeli technology development, US support for Israel’s foreign weapons sales, weapons co-production agreements, all sorts of loan guarantees, assistance for settlement of immigrants in Israel – the list goes on – that literally no single entity in Washington is aware of it all.

In September, the US Congressional Research Service made a noteworthy attempt to capture it, but was probably only partly successful, having no access, for example, to classified US assistance. The annual value of all this is literally incalculable, and well in excess of the $3bn per year usually cited, to say nothing of critical US diplomatic support in the UN and elsewhere.

Given all this, confronted with Israel’s refusal to extend its partial moratorium on new settlement construction in the Occupied Territories, and with anything more than verbal pressure on Israel literally unthinkable, the US was hard-pressed to come up with additional inducements which might extend the peace process even a little further.

Into the breach, as he has done so many times before, stepped the redoubtable Dennis Ross. Ross, in discussions with an Israeli counterpart, compiled an extensive list of motivators whose length we do not yet know, but which was verbally agreed between Clinton and Netanyahu in New York, and which will be presented in writing for possible approval by the Israeli cabinet.

We are told it includes a US commitment to block any Palestinian-led effort to win unilateral UN recognition of a Palestinian state; US obstruction of efforts either to revive the Goldstone Report at the UN, or to seek formal UN condemnation of Israel for the deadly Mavi Marmara incident; an ongoing US commitment to defeat any UN resolutions aimed at raising Israel’s unacknowledged nuclear weapons programme before the International Atomic Energy Agency (IAEA); vigorous US diplomatic efforts to counter all attempts to “delegitimise” Israel in various world fora; and, most importantly, increasing efforts to further ratchet international sanctions on both Iran and Syria concerning their respective nuclear and proliferation efforts.

To this the US is adding a commitment to supply Israel with some 20 ultra-modern F-35 aircraft worth $3bn – so new they have not yet entered the US inventory – as well as a mysterious “comprehensive security agreement,” whose details have not been revealed, but which may include unilateral US endorsement of Israeli troop deployments in the Jordan Valley, in the event of an Israeli-Palestinian peace agreement.

And what is Israel being asked in return? Consider this carefully: in return for the above written guarantees, Israel will consider agreement to a brief, one-time-only 90-day extension of the partial settlement moratorium, which excludes not only East Jerusalem, but also the cordon sanitaire of settlements which Israel has carefully constructed to ring the city and deny Palestinian access to it, after which the US agrees, in writing, never again to request an Israeli settlement moratorium.

After witnessing US policy toward Israel and the Palestinians for over 30 years, I had thought I was beyond shock. This development, however, is breathtaking. In effect, along with a whole string of additional commitments, including some potentially far-reaching security guarantees which it is apparently afraid to reveal publicly, the Obama administration is willing to permanently cast aside a policy of some 40 years’ duration, under which the US has at least nominally labelled Israeli settlements on occupied territory as “obstacles to peace,”. All this in return for a highly conditional settlement pause which will permit Netanyahu to pocket what the US has given him, simply wait three months without making any good-faith effort at compromise, and know in the end that Israel will never again have to suffer the US’ annoying complaints about illegal settlements.

Leave aside the fact that as of this writing, the Israeli cabinet may yet reject this agreement – which seems even more breathtaking, until one stops to consider that virtually everything the Americans have offered the Israelis they could easily obtain in due course without the moratorium. No, what is telling here is that the American attempt to win this agreement, lopsided as it is, is an act of sheer desperation.

What gives rise to the desperation, whether it is fear of political embarrassment at a high-profile diplomatic failure or genuine concern for US security interests in the region, I cannot say. It seems crystal clear, however, that the administration sees the next three months as a last chance. Their stated hope is that if they can get the parties to the table for this brief additional period, during which they focus solely on reaching agreement on borders, success in this endeavour will obviate concerns about settlements and give both sides sufficient stake in an outcome that they will not abandon the effort.

No one familiar with the substance of the process believes agreement on borders can be reached in 90 days on the merits; consider additionally that negotiators will be attempting to reach such a pact without reference to Jerusalem, and seeking compromise on territory without recourse to off-setting concessions on other issues, and success becomes virtually impossible to contemplate.

The Obama administration is coming under heavy criticism for having no plan which extends beyond the 90 days, if they can get them. There is no plan for a 91st day because there is unlikely to be one. The Obama policy, absurd as it seems, is to somehow extend the peace process marginally, and hope for a miracle. The demise of that hope carries with it the clear and present danger that residual aspirations for a two-state solution will shortly be extinguished with it.

Meanwhile, in Israel, we are seeing something akin to buyer’s remorse. On the cusp of finally achieving the goal for which Likud has aimed since its founding in 1973 – that is, an end to the threat of territorial compromise which would truncate the Zionist project in Palestine – the Israeli military and intelligence communities, which will have to deal with the consequences of a permanently failed peace process and the dissolution of responsible Palestinian governance in the West Bank which could well follow, are actively voicing their concerns.

Even as ardent a Likudnik as Dan Meridor has recently said to Haaretz: “I’ve reached the painful conclusion that keeping all the territory means a binational state that will endanger the Zionist enterprise. If we have to give up the Jewish and democratic character (of the state) – I prefer to give up some of the territory.”

The time for such second thoughts has passed, however. Having succeeded in creating irrevocable facts on the ground, settlements which no conceivable Israeli government could remove even if it wanted to, the territory which Meridor and company would conceivably part with now will not be enough to avoid the fate which they fear in future: the progressive delegitimation of the current state, and the eventual rise of a binational state in its place.

The terminal gloom among the tired leadership of the Palestinian Authority (PA) is palpable. They will not allow themselves to be openly complicit in a negotiated capitulation to Israel, and yet they cannot bring themselves to irrevocably abandon the process either.

The recent, relative success of Salam Fayyad, the prime minister, in bringing some measure of security and good governance to the West Bank notwithstanding, they know their legitimacy is tied to the hope of their people for a just peace – a peace they also know, in their hearts, they cannot deliver. They look to the Americans in hope of salvation, while the Americans can only hope, impotently, for the same.

Both Israelis and Palestinians know that the relative calm prevailing in the West Bank and Gaza cannot last indefinitely absent some prospect for an end to Israeli occupation of the former. No one can see the way to a near-term solution, and yet neither does anyone yet have the courage to suggest an alternative future.

That will be the task of a new and probably distant generation of Israelis and Palestinians.