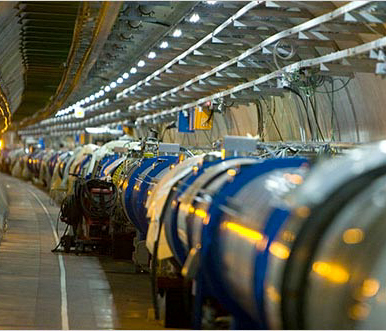 Last month saw miniature versions of the “Big Bang” being created within the Large Hadron Collider, based under the Alps at CERN. Scientists are cheering at the achievement, which generated temperatures of over 10 trillion degrees, a million times hotter than the centre of the Sun; this achievement opens up a new era in particle physics research.

Dr David Evans, a member of the UK team who worked on the experiment was thrilled by the success, “At these temperatures even protons and neutrons – which make up the nuclei of atoms – melt, resulting in a hot dense soup of quarks and gluons known as a quark-gluon plasma.”

He is, I am sure, also glad that the experiment did not turn the whole universe into goo, or initiate the beginning of a black hole sucking us all into it, as other scientists were predicting. Dr Evans is now looking forward to “studying a tiny piece of what the universe was made of just a millionth of a second after the Big Bang.”

For me, I’m not overly concerned about apocalyptic warnings of the end of the world. It’s going to happen one day, and there is nothing I can do to stop it. And not being a scientist, I’m struggling to imagine the vast amounts of data that is supposedly meant to reflect conditions not seen for over 13 billion years.

As a Muslim, I have no problems with science. The word for a verse of the Qur’an and the word for things we see in the revealed universe is the same – “ayah”.  There was a time (albeit about 500 years ago) when Muslims led the world in scientific thinking and were prepared to embrace new ideas and discovery. Those pioneering scientists were inspired by the Qur’an itself, which encourages us to look at the Universe, including the Big Bang which it potentially describes thus, “You were one unit of creation until we drove you apart.”

However, the thing which I find more interesting is not what happened in the nano-second after the Big Bang, but what was going on in the nano-second before it. My children often say to me, “It’s strange Mummy to think of something existing from nothing.” There are two ways to look at it, I tell them. One, all this material Universe, and that includes not just our little world, but a cosmos covering some 100 billion stars in the Milky Way plus 100 billion galaxies in the visible Universe, came out of NOTHING. It just ‘Big Banged’ itself into existence. Or two, all of the Universe as we know it came out of something which no eye has seen and no mind has conceived.

I’ll be honest. I have no idea how the Universe came about, and I can’t prove that God exists, but it is illogical to me to believe that the material universe Big Banged itself out of nothing. It is much more rational for me to believe that something material came out of a “something” which I don’t understand. And that “something” may just well be worth trying to connect to in some other non-material, dare I say, “spiritual” way.

‘Angels and Demons’, the bestselling novel by Dan Brown is themed around the experiments at CERN. In the book, Leonardo Vetra, a devout Catholic and CERN scientist, believes that science is capable of establishing a link between man and God, a belief that was manifested by his research on anti-matter. Vetra’s beliefs cause great discomfort to the Papal aid, Carlo Ventresca, who firmly believes that the Church alone, not science, should dictate the moral creed of the Christian faithful.

I’m not sure either is the right perspective. Faith-based moral creeds offer guidelines to the god-like excesses of scientists who may get over excited from time to time. Yet science can help us understand our world and inspire awe about the magnificence of the Universe. At the same time, whilst science and Large Hadron Colliders are great, and I get rather excited by them, I am not expecting any immense revelations as to the nature of the “something” before the Big Bang – a something I’ll just keep on calling God. A something which, to my mind, is beautifully summed up by the Qur’an, “Say He is God, the One. The uncaused cause of all creation. He begets not, neither is He begotten, and there is nothing which can be compared to Him.”