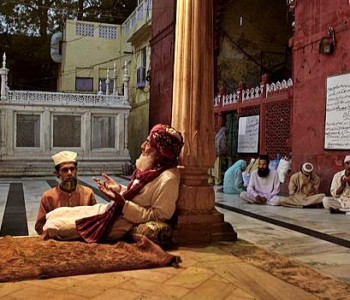 “God is love,” the New Testament teaches, and Muslim theologians would respond, “But of course.” The problem is that we are not God. As Jesus said, “Why callest thou me good? There is none good but one, that is, God ” (Mark 10:18). There is no authentic love but one, that is, God. This is tawhid, the assertion of divine unity that is the foundation of Islamic thought.

Religious discussions of love sometimes address how it descends from its divine status and intermingles with human affairs. In any case, everyone recognizes its attractive power, even if they disagree as to what it is and where it comes from. Rumi mentions the two extremes of disagreement in the verse,

For the elect, love is a tremendous eternal light,

“The elect and the common people” is an expression used in all branches of Islamic learning to distinguish between the experts and the uninformed. For Rumi, the experts are the prophets and saints.

To think that love is “form and appetite” is to imagine that it derives from the realm of sense perception and biological processes. Rumi has nothing against form and appetite, but he sees the distinctiveness of human nature to lie in its openness to the tremendous eternal light.

“Eternal” (qadim) means unchanging. The word is contrasted with “newly arrived” (muhdath), which means dwelling under the sway of time and alteration. God is eternal, and everything other than God — the universe and all it contains — fades away. We change, the eternal light stays the same. We have the appearance of reality, but every appearance disappears.

The Quran says that God is “the light of the heavens and the earth” (24:35). The heavens are the high realms of spiritual beings (such as angels and souls), and the earth is the low realm of bodily things. Nothing appears without light. The more intense the light, however, the more difficult it is to see, which explains why the spiritual realm is invisible. No one can imagine the upper limit of physical light, much less that of nonphysical light, which is the consciousness that animates the heavens and the earth.

Spiritual traditions speak of ascending levels of nonphysical illumination, beginning with the obscure sparkles that typify everyday awareness and culminating in the infinite light of the eternal Self. In the Quran’s retelling of the story of Moses and the Burning Bush, the light said, “I indeed am God; there is no god but I” (20:14): There is no god but God’s very Self, the light of the heavens and the earth.

Rumi’s verse, in short, refers to the axiom of tawhid, the fact that there is no true light but the divine light and no true love but the divine love. Everything in heaven and earth is the reverberation of the loving light. Each thing arrives newly and departs just as quickly. In relation to the universe, God is like the moon in relation to flowing water. As Rumi puts it,

shining therein the attributes of the majestic God…

Ages have passed, and this is a new age.

The moon is the same, but the water is not.

Our scientific worldview is rooted in the measurable, but love and God are immeasurable. Scientific theories that speak of love naturally tend to agree with Rumi’s common people: Love is form and appetite, feeling and emotion, impulses in the brain — all these can be measured. The Quranic and Biblical worldviews see love as none other than the only reality that truly is. The word “reality,” of course, fails to stir the heart, and “love” calls for commitment. Those who answer the call can transform themselves and the world.

Among the many mentions of love in the Quran, the favourite verse of love-theorists is this: “He loves them, and they love Him” (5:54). This verse puts the Islamic worldview in a nutshell: God brought the universe into existence because of his love for human beings. Human beings fulfil their calling by loving God.

The radiance of love’s eternal light gives rise to the universe. The goal of love is to overcome separation, to bridge gaps, to bring the two lovers together as one. If love is to do its work, people must recognize the light and love it in return.

“He loves them” brought them into existence. Their recognition of the light feeds “They love Him.” Once love intervenes, form and appetite lose their lustre.

The final goal of lovers is to join the shining light at its source. The power that works this transformation is love. One of the many Quranic names of God is “friend” (wali), an Arabic word that combines the senses of “lover” and “helper.” Both meanings can be seen in the verse, “God is the friend of those who have faith. He brings them out of the darkness into the light” (2:257).