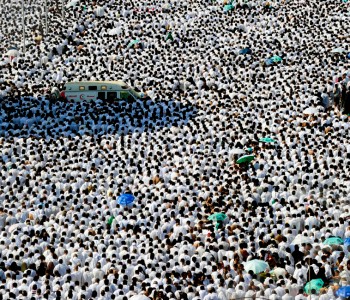 A dozen glittering skyscrapers tower over Islam’s holiest shrine, the Kaaba, boasting hotel rooms with 24-hour butler service and luxury marble bathrooms. Below, throngs of Muslims perform the annual hajj pilgrimage, many of them impoverished, sleeping in the streets.

Saudi authorities have transformed the look of Mecca, Islam’s most sacred city, and are planning even more dramatic change in years to come. But much of the change has catered to high-end pilgrims, and critics say what is supposed to be an austere spiritual ritual bringing Muslims closer to God has turned into a luxury expedition for some.

Samir Barqah, a guide who runs tours of the historic city in Mecca, says luxury towers are turning Mecca into Manhattan.

“The fast urban development managed to remove all the character from Mecca,” Barqah said. “Mecca as our parents and grandfathers knew it no longer exists … Mecca is now becoming a layer of glass and cement sheets.”

The skyscrapers, sporting towering glass facades and luxury shopping malls, have sprouted up around the esplanade in front of the sprawling, multilevel Grand Mosque. The mosque surrounds the Kaaba, the cube-shaped shrine that Muslims around the world face during prayers and pilgrims circle seven times during the hajj rites.

Until recently, Mecca, the homeland of Islam’s seventh century Prophet Muhammad, was a rather ramshackle city, built up with little planning over several desert hills with low, often dilapidated buildings. It could barely handle the burden when the numbers of pilgrims descending on it every year were only in the hundreds of thousands.

Now those numbers are in the millions, making the hajj one of the biggest annual events in the word. And it’s only growing — officially nearly 3 million participated in this year’s pilgrimage, which was ending Friday, not counting hundreds of thousands of “unofficial” pilgrims who sneak into Mecca without hajj permits required by Saudi authorities.

So Saudi Arabia is launching a massive project to upgrade Mecca and nearby shrines over the next 10 years. The goal is to accommodate five times the current number of pilgrims.

“Don’t be surprised by anything in the next decade,” the governor of Mecca province, Prince Khaled al-Faisal told journalists Thursday, promising the most advanced technology to “make things comfortable for the pilgrims.” He wouldn’t give the cost, but said it was “unimaginable.”

The plan includes removing slums and old buildings around Mecca and replacing them with a new generation of housing and hotels. Authorities also plan to build new hospitals and improve transportation and communication infrastructure, said the governor’s deputy, Abdulaziz al-Khedheiri.

The housing will have “a diversity of levels, from one-star to seven star hotels,” he said. For this hajj, Saudi authorities unveiled a train line that carried pilgrims to one of the ritual sites in the deserts outside Mecca although that was reserved for Saudis and citizens of other Gulf nations until it becomes fully operational next year.

Already, buildings are being removed from hills on the northern side of the Grand Mosque to allow an expansion adding room for 1 million more people to pray. So far the expansion has cost $10 billion, al-Khedheiri said.

Management of the hajj is a major way for Saudi Arabia’s ruling family to tout the Islamic credentials central to its legitimacy. Saudi King Abdullah includes among his titles “the guardian of the two shrines” — Mecca and the nearby holy city of Medina.

Over the five days of hajj, the pilgrims trek simultaneously between a string of sites, from the Kaaba to Mount Arafat, a desert hill 12 miles (19 kilometres) away in the desert.

The kingdom has been expanding infrastructure in recent years, and some of the changes have doubtlessly saved lives. The rites at Mina, between Mecca and Arafat, often saw deadly stampedes as huge crowds tried to pass three stone walls symbolizing the devil to pelt them with stones. Now a complex resembling a gigantic, multilevel parking garage surrounds the walls, allowing pilgrims to file by them more easily, and no crushes have occurred since 2006.

But the grand scale — and luxury atmosphere — of some changes threaten to overwhelm the religious sites themselves at times. Historic sites, like houses believed to have belonged to the prophet’s family or old mosques, have been levelled in past construction.

Hayat Hama, a 47-year-old German pilgrim of Iraqi origin, said she didn’t care too much for the skyscrapers crowding the Kaaba. “They were pretty. But when I saw them, I thought they were part of the rituals, something for us to visit,” she said. Still, she said, her trip to Mecca was like “visiting heaven.”

The towers, which contain hotels and malls, are also a stark contrast to the conditions for other pilgrims. Many cram into rented houses, up to 20 people a room, or tromp between the holy sites with only a small tent to sleep under.

Al-Khedeiri pointed out that the land on which the skyscrapers are built is owned by Islamic authorities, so profits go to maintaining and upgrading the holy sites.

The worry is that the massive development will also favour wealthier hajjis in a pilgrimage that is supposed to be a time for Muslims to appear before God equal and pure and lead a few days of hermetic life.

Official pilgrims come through tour groups, which arrange transportation, hotels and space in the tent cities set up around Arafat and Mina. Just like any tour, the more you pay, the better the amenities. Covering the costs of hajj for the poor is a common charity activity in many Muslim nations. Unofficial pilgrims are often those who can’t afford the packages and come to Saudi Arabia long before the hajj season to do it on their own, or residents in Saudi Arabia who can reach Mecca easily.

Some of the luxury towers offer rooms with a view of the Kaaba — a favourite among the better off who don’t want to rub shoulders with the masses but want to still pray in sight of the shrine. Moreover, the rooms offer 24-hour butlers and even a so-called ‘hajj kit’ with designer clothes to be used in rituals, with prices ranging from a whopping $6,000 per night for a royal suite to $1,600 for the regular room. Officials said the hotels were at full capacity this year.

Even the tent cities outside Mecca are cashing in on the high-end. Nicer camps boast BBQs for dinner, juice stands, parasols and plastic chairs for leisure time.

“It is too expensive,” said Khaled Abdel-Maksoud, a 50-year old Egyptian civil engineer.

He has performed hajj for the past four years, each time without a permit, because he lives in the Saudi capital, Riyadh. Even so, this year, he spent nearly a $1,000 for his and his wife’s hajj. For the first days in Mecca, they slept in a rented flat with other families, and for the rest he camped out on the ground.

Along the roads between sites, hotels even rent rooms by the minute to allow pilgrims to pop in, change clothes or shower. They start off at $27 for 10 minutes, but on the last day soared to $267, Abdel-Maksoud said.

“We want every sector to find what they want in this holy city.”