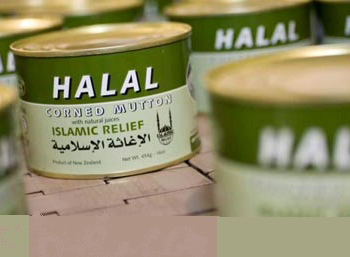 Disaster relief NGO Muslim Aid Asia (MAA) has taken the concept of sacrificial meat to another level by canning and shipping them worldwide. This novel idea ensures that there is no wastage and that the ‘daging korban’ (sacrificial meat), reaches those who really need it.

Canned ‘daging korban’ was initially frowned upon by many when it was mooted here, resulting in only 100 sheep being slaughtered for canning in the first year of operation in 2004.

But slowly, there has been growing acceptance of the practice, and now MAA – the first relief agency to can sacrificial meat in Malaysia – slaughters 1,300 sheep for the Hari Raya Haji festival alone to be distributed all over the world.

Foundation director Wan Rusli Wan Muda said he first stumbled upon the idea by Muslim Aid Australia while on a quest to sacrifice animals during a Hari Raya Haji celebration.

“According to the Malaysian Islamic Development Department (Jakim), there is no religious barring of canning sacrificial meat and the slaughtering done by the Australian Muslim Aid is endorsed by Jakim and the Islamic authorities of Australia,” said Wan Rusli.

However, the concept was slow to catch on here.

“When I first introduced canning, the locals ‘needed’ to see the blood splatter and the meat in plastic bags. I also had to convince them it is all right in Islam and that Jakim had given its ‘okay.’ As such we decided to start with the Klang Valley,” he explained.

To sell the idea, MAA, which is actively involved in raising funds for canning and shipping sacrificial meat, made comparisons between the conventional and modern method.

Another plus point is the shelf life of the sacrificial meat. The canned meat can last three years, versus one to two months in a freezer for freshly slaughtered meat.

“We can send it (canned meat) to any part of the world where there are really needy people who deserve the meat,” added Wan Rusli.

Besides that, the MAA’s method also helps agrarian nations such as Sri Lanka and Indonesia where the animals are bought from farmers for the ‘korban’ (sacrifice), boosting the village economies at the same time.

Wan Rusli said the sheep are slaughtered in Islamically certified abattoirs in Australia and then shipped here where the meat is canned by Pertima, a Terengganu state-owned company.

“The interested party only has to pay us RM380 for one sheep and this includes the cost of slaughtering, shipping, canning and transporting,” said Wan Rusli.

MAA currently takes sheep from Australia as “we do not have enough sheep from the breeders here.

“None of the local farmers can supply that much – we also do not have the facilities of big abattoirs.

“It takes only four days to can all the meat in Australia but here, it takes two months. If we have such facilities, it would be helpful in cases of disasters for instant food aid in cans,” he explained.

MAA sends the meat prepared according to the local conditions – such as mutton in curry to Pakistan and mutton in brine to Iraq. For Palestine, the meat is boneless according to security rules to get past Israeli authorities.

Besides MAA, there are three other fundraising offices in London, Munich and Sydney, and there are 18 site offices all over the world.

In places where there are no site offices, MAA works with the local NGOs there.

“Those who donate to us can also check the website and with us to make sure that we have fulfilled their duty.

“If they do have problems with the shipment, the cans are given to other needy people,” said Wan Rusli.

Besides canning sacrificial meat during Hari Raya Haji, the director said that the foundation also has Fast to Feed programmes during the fasting month in Ramadan where the needy people in poorer countries are fed at least a vitamin enriched meal a day.

“Our targets are deserving causes within Southeast Asia and the Far East.”

Being based in Malaysia, we are able to maintain close contract with an extensive network of local NGOs and local relief agencies,” said Wan Rusli.