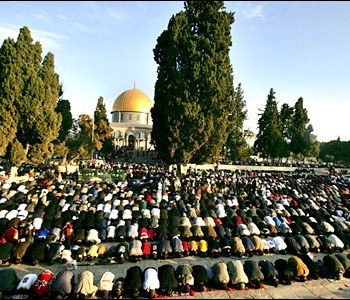 Muslims were the biggest minority in Israel at end of 2009, with an average birth-rate standing at 3.7 children per woman – the highest of any community in the country and greater than that of Muslims in Syria, Lebanon and Egypt.

At this time, the Muslim population here was estimated to be 1,286,000 people, an increase of 32,000 people from the end of the previous year, according to new figures released by the Central Bureau of Statistics on Monday. The birth-rate had dropped from 4.7 children per woman in 2000 to the 3.7 figure in 2009.

Meanwhile, the average birth-rate among Jews in Israel is 2.96, according to another CBS study.

Among the country’s Muslims, 264,000 thousand (20.5 per cent) live in Jerusalem, constituting over a third (34.2%) of all the capital’s residents, and making it the largest community of Muslims within Israel.

In terms of faith, nine per cent of Muslims define themselves as very religious, 51% as religious, 29% as not so religious and 10% as not religious.

Regarding education, Muslim students in Israeli universities now account for 6.5% of all students, compared to 3.1% in 1989.

The figures show that Muslim university students in comparison to their Jewish counterparts are more likely to pursue studies in the medical fields and less likely to study engineering and architecture.