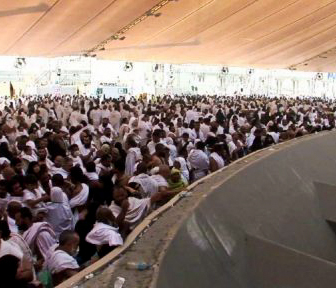 A human tide of pilgrims, put at nearly 2.8 million, descended Tuesday on the Mina valley carrying bags of pebbles to symbolically stone Satan on the third day of the hajj, as Muslims worldwide marked the Eid al-Adha festival.

Small pebbles whizzed above heads as hundreds of thousands of pilgrims rushed to stone Jamarat al-Aqaba, at 30 metres (100 feet) the longest of three walls said to symbolise the devil, also referred to as ‘Iblis’ by Muslims.

Pilgrims who are taking part in this year’s hajj, the world’s largest annual pilgrimage, had arrived overnight at Mina, a tent town in western Saudi Arabia that comes to life five days a year, after returning from rituals marking the high point of the hajj at nearby Mount Arafat on Monday.

A total of 1,799,601 pilgrims from outside Saudi Arabia and 989,798 from inside made the hajj this year, for a total of 2,789,399, said a statement from the department of statistics carried by the official SPA news agency.

The figure is far higher than official estimates given at the beginning of the hajj, probably due to a flood of pilgrims without permits. Authorities on Sunday put the number of permits issued to Saudis and citizens of other Gulf States at just 200,000.

“We are expelling the devil from our minds,” said Marwan Mashah of Jordan, after throwing seven pebbles at the stone structure representing Satan.

Elderly Mohammed Othman, from Egypt, enthusiastically hurled the seven pebbles he had in his pouch, then picked stones up from around him and threw them too.

The stoning has been marred by deadly stampedes in previous years but the Saudi authorities have now revamped the area, expanding the stoning path into a multi-storey bridge.

The structure, which resembles a car park, sits in the middle of a barren valley surrounded by arid rocky hills, is aimed at preventing the kind of crowd control problems that saw 364 people trampled to death in 2006, 251 in 2004 and 1,426 in 1990.

The endless flood of white-robed pilgrims was directed onto various levels by police, who made sure all moved in one direction only and that no one stayed too long. Those taking a seat were hastily moved on.

At the fifth level of the bridge — the highest — the crowded entry point eases onto a wide bridge where pilgrims can more easily carry out the stoning rituals.

At the exit of the bridge, men who had finished the stoning sat on the pavement shaving each other’s heads, or just having a trim. Women cut a finger-tip length of their hair.

After the stoning, pilgrims made the ritual sacrifice of an animal, marking the Muslim feast of Eid al-Adha.

The sacrifice is a prophetic tradition, but not a must according to several schools of Islamic thought.

Most pilgrims perform the sacrifice now through special bodies that take care of slaughtering the animals and distribute the meat to needy Muslims around the world.

The sacrifice honours Ibrahim’s willingness to sacrifice his son on God’s order before he was forestalled with a lamb, according to Islamic tradition. 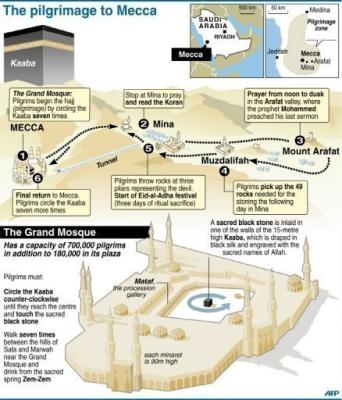 After the first stoning rituals, pilgrims travelled to Mecca, some five kilometres (three miles) west of Mina, to perform Tawaf, or circumambulation of the Kaaba seven times.

The cube-shaped Kaaba stone structure, towards which Muslims worldwide face for prayer, is situated within the sacred Grand Mosque compound.

Pilgrims also performed Sa’i, going back and forth between the two stone spots of Safa and Marwah in seven lengths.

The ritual is meant to copy the desperate walks of Hagar, wife of Ibrahim, who was seeking water for her infant Ishmael after he left them in the barren spot.

After Tawaf and Sa’i, many pilgrims put their normal clothes back on. They return to Mina to perform stoning at three spots over two more days.

According to tradition, the devil appeared to Abraham at those three sites trying to dissuade him from obeying God’s orders.

No major incidents have been reported so far at this year’s pilgrimage, which ends on Friday.