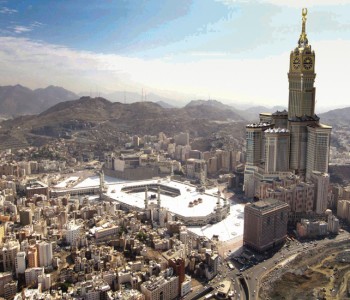 Sitting in the marble lobby of a luxury hotel in Mecca, Moroccan bank director Mohammad Hamdosh gets a breather from the cacophony of pilgrims bustling around the Grand Mosque in Islam’s holiest city.

Millions have flocked to the city in Saudi Arabia for the annual haj pilgrimage, a duty for every able-bodied Muslim who can afford it. But some can afford more than others, and a controversial construction boom is catering to their needs.

Inside the mosque, all pilgrims are equal as they circle the black stone known as the Kaaba towards which Muslims around the world turn in prayer every day.

But outside an array of towering five-star hotels have sprung up where the wealthy can bask in a 24-hour view of the Kaaba. The high-rises dwarf the mosque and the surrounding town, nestled in the mountains in the hinterland of the port city Jeddah.

It is part of a wider project to expand the mosque and bring more Muslims to the holy city for salvation, according to the writs of Islam — something Saudi Arabia sees as its duty.

Mecca has just inaugurated the world’s largest clock face perched Big Ben-style on the front of a high-rise hotel facing the Kaaba, while some 20 cranes next to the mosque herald more luxury accommodation.

The spending spree in Mecca and the second holy city Medina is valued at some $120 billion over the next decade and at present there are $20 billion of projects underway in Mecca alone, according to Banque Saudi Fransi. A square metre land in Mecca costs some 50,000 riyals ($13,333).

“If people are in a good position they should stay close to the mosque,” said Farhad Yaftali, a 25-year-old pilgrim from an five-strong Afghani business family in Dubai who paid $15,000 each. “It’s good to have a room to rest and do wudu (ablution),” he said, sipping tea in the cafe of the same five-star hotel.

The Saudi government is proud of the development, made possible by the country’s vast wealth accrued from its oil resources. The work is the latest stage in mosque expansions to accommodate pilgrims that stretch back decades.

“In the past 10 years, we’ve seen a big rise in pilgrims. This year the number of pilgrims will rise by 20 per cent,” Interior Minister Prince Nayef bin Abdulaziz told a news conference in Mecca this week.

“Work to further improve the level of services to pilgrims of the House of God is continuing,” he said. Hoteliers say they expect more than three million pilgrims, maybe even four.

Many Saudi intellectuals, mainly from the Mecca region, are disturbed by the government’s plans, which diplomats in Riyadh say have been approved only by senior clerics away from public scrutiny.

Saudi newspapers and Islamist blogs have engaged in some debate about the building frenzy, but no criticism comes from the top Saudi scholars who are allies to the Saudi royal family in governing the kingdom — which has no elected parliament.

“Long before Islam, Arabs didn’t dare live in the circle of what we call ‘al-haram’, meaning the sacred area (of the mosque),” she said. “They spent their days in the holy city and moved out with nightfall. They thought their human activities defile God’s home.”

The rites of pilgrimage reinforce this sense of humility before God. Men wear two simple pieces of white cloth and women avoid perfumes.

“The notion of filling Mecca’s sky line with modern skyscrapers is not only undermining the Kaaba, it is a clear material symbol of a massive cultural and social deletion the city has experienced,” said Saudi columnist Mahmoud Sabbagh.

“The replacement of the old city has taken with it centuries-long preserved traditions in academic, social, and cultural systems and mechanisms. The whole cultural paradigm has been damaged,” he said.

In recent decades many old houses have been torn down in Mecca to allow better access to the haram, making way for malls, hotels and huge underground parking areas. Locals are compensated for houses they lose.

Irfan al-Alawi, an Islamic theology professor based in London, said the Vatican would never sanction such work in its own sacred precinct.

The government should use space outside the city to build hotels, he said: “Mecca doesn’t have to look like Manhattan or New York.”