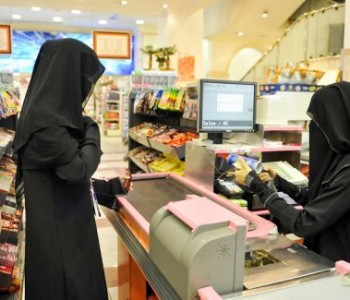 Women cashiers were at work in several Jeddah supermarkets on Saturday as their employer ignored a fatwa by the country’s highest religious authority forbidding female checkout clerks.

The popular Marhaba chain kept the women on the job despite the six-day-old ruling signed by Grand Mufti Sheikh al-Sheikh and six other senior religious scholars which contradicted a key government policy to create jobs for women.

A Marhaba official said the women would keep working until they received an order from the labour ministry to stop the practice, only begun in the past three months after the ministry said it was permitted.

“We will continue to let the women do their jobs. We have not received any official letter from the ministry of labour to stop the practice,” he said on condition of anonymity.

“We have more than 25 women working now in all our branches” he said.

It was unclear whether Panda, another supermarket chain pioneering the use of female checkout cashiers, had its women working Saturday.

On Sunday the official fatwa-issuing body under the Council of Senior Scholars, the top Saudi Islamic authority, ruled that the cashier jobs were not permissible because they resulted in the women mixing with unrelated men.

Saudi Arabia’s ultra-strict form of Islam places severe restrictions on women in public life, requiring them to stay separated from unrelated men and to only travel with the permission of a male guardian, and forbidding them from driving cars.

“It is not permissible for a woman to work in a place where they mix with men,” the fatwa said.

“It is necessary to keep away from places where men congregate. Women should look for decent work that does not make it possible for them to attract men or be attracted by men.”

The fatwa, which can be cited in the courts under Saudi Arabia’s ultra-conservative Islamic sharia-based legal system, posed a direct challenge to a key government policy of creating jobs for women.

Seeking to address both a 28.4 per cent unemployment rate for women in 2009 and create jobs for women whose families have no other means of support, early this year the labour ministry quietly gave permission to supermarket chains and clothing stores to try using female cashiers.

The first stores to start were all in Jeddah, the country’s most progressive city where offices are increasingly open about allowing male and female employees to work side by side.

On Wednesday, the labour ministry told Saudi newspapers it had no reaction yet to the fatwa because they had not yet received it through official channels.