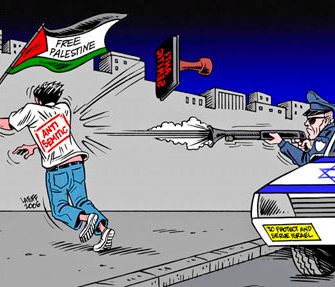 Imagine a mainstream Australian politician saying that Aborigines should be banned from leading tourists around Uluru because they might “present anti-Australian positions” to visitors. The outcry would be furious.

But a bill is currently before the Israeli Knesset, led by a parliamentarian from the “moderate” Kadima party that would bar Arab residents of East Jerusalem from working as tour guides in the city. Knesset member Gideon Ezra said it was essential tourist groups are “accompanied by a tour guide who is an Israeli citizen and has institutional loyalty to the [Jewish] state of Israel”.

It is just the latest sign in an ever-tightening noose around Arabs from the Zionist mainstream in the self-described Jewish nation.

Journalist Gideon Levy writes in the Israeli daily Haaretz that no politician “has even begun to think of Arabs as being equal to Jews”. The Israeli Jewish public increasingly shares these authoritarian views. In a study published in the newspaper Yedioth Ahronoth, 36 per cent of Israeli Jews urged the revoking of Arab voting rights and restriction of free speech in “times of political difficulty”.

Israel is not a democracy for all its citizens but an insecure nation demanding obedience to an ideology that deliberately excludes the legitimate rights of its Arab population.

The occupation in the West Bank is deepening daily, after more than 43 years, with colonies expanding at the fastest rate in two years. The illegal siege on Gaza contributes to Palestinian children suffering debilitating malnutrition.

This is the Israel that Western politicians prefer to ignore. When I recently confronted Opposition Leader Tony Abbott over his blind backing for Israeli “democracy”, he muttered something about the Middle East not being “perfect”. But, I countered, what about Jewish-only settler roads in the West Bank? That was “bad”, he acknowledged, before looking away nervously.

Julia Gillard’s Labor Party shares these delusions. It is one of the reasons that the Independent Australian Jewish Voices group published newspaper advertisements nationally this month demanding the Australian government “exert pressure on Israel to conform to international law and humanitarian standards”.

The growing global concern over Israeli values has been crystallised by the Netanyahu cabinet voting to force non-Jews seeking citizenship to swear allegiance to Israel as a “Jewish and democratic state”.

The decision was met with furious indignation from a vocal minority in Israel; not least Palestinians who were being asked to negate their historical rights. Leftist Jewish Israelis marched through Tel Aviv chanting, “Fascism and ethnic cleansing are standing proud”. In the diaspora there was virtual silence. Blind loyalty came before defending democratic values. The Achilles heel is its deference to Israeli government decisions, a Maoist-like devotion to a country increasingly de-legitimised by its own occupying policies.

One of the main reasons the boycott, divestment and sanctions campaign is thriving around the world – alongside the one-state solution idea – is that Israel ignores global demands to change its behaviour. Cultural and economic isolation worked against apartheid South Africa.

Just the latest example of a principled stance in reaction to the loyalty oath was the refusal of the English filmmaker Mike Leigh to participate in a program at a Jerusalem film school. He also cited expanding West Bank settlements and the brutal attack on the Gaza flotilla.

Leigh was praised by the Palestinian Campaign for the Academic and Cultural Boycott of Israel for highlighting “the fact that collaborating with institutions of a state that practises occupation, colonisation and apartheid, as Israel does, cannot be regarded as a neutral act . . . .”

No other Western state has tried to introduce anything like the loyalty oath. The oath is on an ever-growing list of anti-democratic proposals before the Knesset, including a one-year prison term for “incitement for the negation of the existence of the state of Israel as a Jewish and democratic state”.

Palestinians and leftist Jews are loathed fifth-columns to be smeared and isolated.

No obfuscation about the supposedly devilish plans of Hamas, Hezbollah, Iran or al-Qaeda can distract from the reality of Israel’s inherent racism. The world should stop pumping in funds to perpetuate the infrastructure of oppression.

Antony Loewenstein is a freelance journalist and author of My Israel Question.