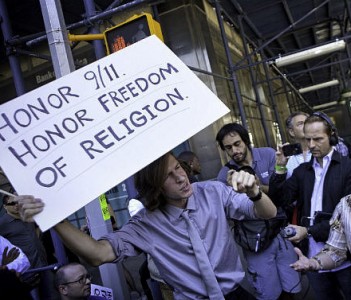 The controversial Islamic centre that is to be built in Lower Manhattan has ignited a sensitive controversy and caused unnecessary division among Americans. The entire issue has become overblown because of right-wing politicians, such as Sarah Palin, who wants to use fear and hate for political advantage.

Palin posted a series of tweets strongly stating her position against the Cordoba House. In one message she wrote, “Peaceful New Yorkers, please refute the Ground Zero mosque plan if you believe catastrophic pain caused at Twin Towers site is too raw, too real.”

It’s hard to take Palin seriously when she makes up her own words, such as refute. Instead of just admitting she misused the word, Palin said she has coined a new word, just like Shakespeare did.

More importantly, Americans must understand the core facts of the issue, and that is that the Cordoba House is not just a mosque, but also a multi-cultural and multi-faith centre dedicated to strengthening the understanding between Islam and the West. It is an insult to the Islamic community to not correctly recognize their efforts to improve multi-cultural relations.

Sarah Palin is also wrong to say that the “mosque” is located at Ground Zero. You cannot see Ground Zero, the former site of the World Trade Centre, from the site where the Cordoba House will be located. Someone looking to be offended by the mosque must walk at least two minutes out of their way to see it.

As Americans, we must remember that our country fully supports freedom of religion as written in the Constitution. As President Obama stated in a speech addressing the cultural center, “This is America, and our commitment to religious freedom must be unshakable.” Would we not be going against the intentions of our founding fathers if we do not welcome people of all faiths?

It’s important we don’t forget who our enemy is. Al-Qaeda is not driven by Islam and they are not religious leaders. They are terrorists whose goal is to gain political power by murdering innocent men, women and children. Al-Qaeda has killed more Muslims than people of any other religion, which includes innocent Muslims who were killed on September 11. Coming together as a country, no matter what race, religion, or ethnicity is essential to who we are. Respecting the right to build the Cordoba House is just one more step closer to uniting our country and overcoming the terrorists who tried to destroy us on 9/11.

Ted Olsen, Solicitor General in the George W. Bush administration and husband of a victim of the 9/11 attacks said it well: “We don’t want to turn an act of hate against us by extremists into an act of intolerance for people of religious faith and I don’t think it should be a political issue, it shouldn’t be a Republican or Democratic issue either.”