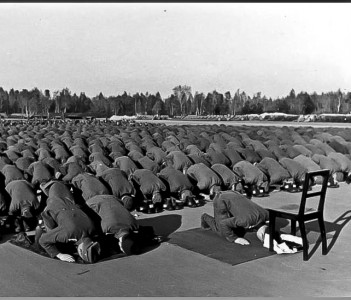 With rising anti-Muslim sentiment across the country, an untold story is raising greater awareness about the Muslim faith and the teachings of the Quran. That awareness comes from an unlikely source: a small Jewish congregation in Creve Coeur.

Temple Emanuel is premiering a groundbreaking exhibit of photos that reveals Albanian Muslims who saved 2,000 Jews during World War II.

It’s a story you’ve likely never heard. It is a story told through the faces of Albanian Muslims who risked their own lives to live by a code of faith and honor called Besa.

Dr. Ghazala Hayat is a neurologist at St. Louis University and serves as spokesperson for the Islamic Foundation of Greater Saint Louis.

Hayat said while Besa is an Albanian word, it is part of Islamic culture and teachings. According to Dr. Hayat, Besa is an ancient code which requires people to endanger their own lives if necessary to save the life of anyone seeking asylum. To this day, Besa is the highest moral law of the region, superseding religious differences, blood feuds, and even tribal traditions.

The exhibit is opening eyes throughout the world.

“You don’t have to share the same faith. You have to respect each other’s faith,” Hayat said.

Pictures of the Albanian Muslims in the exhibit tell a lifetime of stories. As a young mother, one woman did not have enough breast milk to feed her son. A Jewish woman she hid nursed him instead. She was asked if she minded that a Jewish mother had fed her baby.

“Jews are God’s people like us,” the woman said.

Another man who also hid Jewish families said, “I did nothing special. All Jews are our brothers.”

And the head of the Bektashi sect, with more than seven million followers, tells the story of Albania’s prime minister, who gave a secret order during the Nazi occupation.

“All Jewish children will sleep with your children, all will eat the same food, and all will live as one family,” the order read.

In post-war Europe, it is said Albania was the only Nazi-occupied country to boast a greater number of Jews than before the Holocaust.

“They were among the people who at great personal risk sheltered Jews and protected them in their homes and did so out of a religious obligation,” said Rabbi Justin Kerber, Temple Emanuel.

The Islamic Foundation of Greater St. Louis and several local Jewish agencies hope the St. Louis community will experience this rare look at the role Albanian Muslims played in sheltering Jews from the Nazis.

“At this time of tension over Islam in America, there is so much more to understanding Islam,” Rabbi Kerber said.