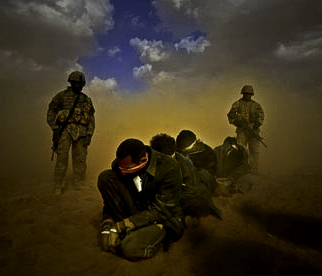 The UN has called on Barack Obama to order a full investigation of US forces’ involvement in human rights abuses in Iraq after a massive leak of military documents that detail torture, summary executions and war crimes.

The call, by the UN’s chief investigator on torture, Manfred Nowak, came as Phil Shiner, human rights specialist at Public Interest Lawyers in the UK, warned that some of the deaths documented in the Iraq war logs could have involved British forces and would be pursued through the UK courts. He demanded a public inquiry into allegations that British troops were responsible for civilian deaths during the conflict.

The Guardian has analysed the 400,000 documents, the biggest leak in US military history, and found 15,000 previously unreported civilian deaths. The logs show how US authorities failed to investigate hundreds of reports of abuse, torture, rape and murder by Iraqi police and soldiers whose conduct appears to be systematic and generally unpunished.

Nowak said that if the files released through WikiLeaks pointed to clear violations of the UN Convention Against Torture the Obama administration had an obligation to investigate them.

The logs paint a disturbing picture of the relationship between US and Iraqi forces. Nowak said that UN human rights agreements obliged states to criminalise every form of torture, whether directly or indirectly, and to investigate any allegations of abuse.

Speaking on the BBC’s Today programme, Nowak, who has spent years investigating allegations of US participation in extraordinary rendition and the abuse of detainees held by coalition forces, said the Obama administration had a legal and moral obligation to fully investigate credible claims of US forces’ complicity in torture.

A failure to investigate, Nowak suggested, would be a failure of the Obama government to recognise its obligations under international law. He said the principle of “non-refoulement” prohibited states from transferring detainees to other countries that could pose a risk to their personal safety.

The documents, which cover the period in Iraq from 2004 onwards, have prompted claims that this principle has not been observed. The files contain evidence that US forces were ordered to turn a blind eye to abuses committed by the Iraqi authorities.

Nowak said the US had an obligation “whenever they expel, extradite or hand over any detainees to the authorities of another state to assess whether or not these individuals are under specific risk of torture. If this assessment is not done, or authorities hand over detainees knowing there is a serious risk of them being subjected to torture, they violate article 3 of the UN convention that precludes torture.”

Nowak said it would be up to the Obama administration to launch an “independent and objective” investigation with a view not only to “bring the perpetrators to justice but also to provide the victims with adequate remedy and reparation”.

He noted that neither the US nor Iraq had ratified the international criminal convention that would see officials from either country brought before the international courts for war crimes. It would be up to the US courts to determine whether US officials or soldiers had breached human rights laws. “If it is established that a particular individual is responsible for torture directly or by complicity, this person should be brought to justice in the domestic courts,” Nowak said.

As recently as December, the Americans were passed a video apparently showing Iraqi army officers executing a prisoner in Tal Afar, northern Iraq. The log states: “The footage shows approximately 12 Iraqi army soldiers. Ten IA soldiers were talking to one another while two soldiers held the detainee. The detainee had his hands bound … The footage shows the IA soldiers moving the detainee into the street, pushing him to the ground, punching him and shooting him.”

The report named at least one perpetrator and was passed to coalition forces. But the logs reveal that the coalition has a formal policy of ignoring such allegations. They record “no investigation is necessary” and simply pass reports to the same Iraqi units implicated in the violence. By contrast all allegations involving coalition forces are subject to formal inquiries. Some cases of alleged abuse by UK and US troops are detailed in the logs.

In two Iraqi cases postmortems revealed evidence of death by torture. On 27 August 2009 a US medical officer found “bruises and burns as well as visible injuries to the head, arm, torso, legs and neck” on the body of one man claimed by police to have killed himself. On 3 December 2008 another detainee, said by police to have died of “bad kidneys”, was found to have “evidence of some type of unknown surgical procedure on [his] abdomen”.

A Pentagon spokesman told the New York Times this week that under its procedure, when reports of Iraqi abuse were received the US military “notifies the responsible government of Iraq agency or ministry for investigation and follow-up”.

In response to the revelations, the Iraqi government has vowed to probe the allegations made against its soldiers and police. “The government will show no leniency when it comes to the rights of its citizens,” said a statement issued by prime minister Nouri al-Maliki’s office.

Shiner told a press conference organised by WikiLeaks in London today that he plans to use material from the logs in court to try to force the UK to hold a public inquiry into the unlawful killing of Iraqi civilians.

Shiner warned that it would be wrong to assume the US military files “had nothing to do with the UK”. He said: “Some have been killed by indiscriminate attacks on civilians or the unjustified use of lethal force. Others have been killed in custody by UK forces and no one knows how many Iraqis lost their lives while held in British detention facilities.

“If unjustified or unlawful force has been used, prosecutions for those responsible must follow, so we are bringing forward a new case seeking accountability for all unlawful deaths, and we argue that there must be a judicial inquiry to fully investigate UK responsibility for civilian deaths in Iraq.”

He cited one case in which he claimed a British rifleman had shot dead an eight-year-old girl who was playing in the street in Basra. “For some reason the tank stopped at the end of the street, she’s there in her yellow dress, a rifleman pops up and blows her away,” he said.

A spokesman for the Ministry of Defence, which has set up the Iraq Historic Allegations Team to investigate allegations of abuse, said: “It would be inappropriate to speculate on the specific detail of these documents without further investigation while the Iraq Inquiry is ongoing. There is no place for mistreatment of detainees and we investigate any allegation made against our troops.”

The WikiLeaks founder, Julian Assange, told the press conference that the disclosure of the secret files was about getting to the truth of the Iraq conflict.

“We hope to correct some of that attack on the truth that occurred before the war, during the war, and which has continued since the war officially concluded. While I am not sure we have achieved the maximum possible [political impact], I think we are getting pretty close.”

Assange highlighted how the reports documented 109,000 deaths – including 66,000 civilians, of which 15,000 were previously undocumented. “That tremendous scale should not make us blind to the small human scale in this material. It is the deaths of one and two people per event that killed the overwhelming number of people in Iraq.”

The electronic archive is believed to emanate from the same dissident US army intelligence analyst who earlier this year is alleged to have leaked a smaller tranche of 90,000 logs chronicling bloody encounters and civilian killings in the Afghan war.