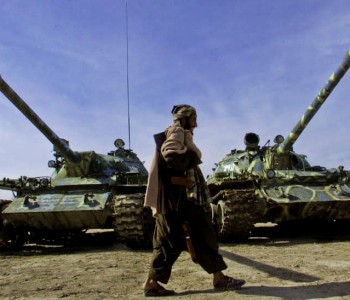 In September 2007, an Iraqi in a car ventured too close to a US patrol in Baghdad. The soldiers honked their horns; when that didn’t cause the car to turn away, one of the gunners fired a warning shot. The bullet – intended to harmlessly hit the pavement – instead hit a bystander.

Gunner fires one warning shot from his M4. The bullet ricochets and hits one local national (9 year old girl). Patrol stops traffic at the intersection.

Andrew Bacevich, a military historian and retired US army colonel, wrote in 2006 that “such mistakes have occurred routinely, with moral and political consequences that have been too long ignored.” That assessment is borne out by the leaked reports, which describe almost 14,000 “escalation of force” incidents – the army’s euphemism for often-violent altercations that occurred at checkpoints and near patrols.

The “escalation of force” concept is supposed to reduce violence, since it requires US troops to use an escalating series of non-lethal measures before applying deadly force.

In many cases, though, these “escalations” had unintended consequences. According to the reports, more than 300 civilians were injured by warning shots that ricocheted off the pavement or other surfaces. (It’s impossible to know, of course, whether these incidents are reported honestly, or whether soldiers sometimes report a poorly-aimed warning shot as a “ricochet.”)

In several incidents – none of them fatal – soldiers fired warning shots at deaf and nearly-blind men who could not see or hear their verbal warnings. Several mentally ill men were killed: In February 2005, for example, US soldiers shot a man in Mahmoudiya when he ran too close to an approaching convoy. They only later learned that he was mentally ill and often begged for food in the area near the convoy’s route.

Other incidents ended with what the military itself called a disproportionate use of force. In September 2005, after going through an appropriate escalation, two soldiers from the 1-155th infantry opened fire on an approaching vehicle with M249 machine guns. Both poured 100 bullets into the car – five or six seconds of sustained fire from a gun capable of shooting 1,000 rounds per minute.

Relatives of those killed were later awarded $10,000 compensation from the US military, which found the soldiers violated their rules of engagement.

The rules of engagement in Iraq require soldiers and marines to cycle through a range of escalating warnings for vehicles that behave erratically at checkpoints or venture too close to patrols.

Verbal commands and hand signals to stop, plus other cues, like flashing lights and horns;

Warning shots, generally fired in front of the vehicle;

“Disabling shots,” aimed first at the vehicle’s engine block, and then at the driver.

At least a half-dozen incidents involved Iraqi men transporting their pregnant wives or family members to hospitals. A report narrates the incident in Ramadi in May 2005 that left two people wounded.

The engagement resulted in (1) male CWIA (urgent surgical, driver) and (1) female CWIA (front seat passenger). There was (1) pregnant female and her sister in the back seat of the vehicle with no injuries. The pregnant woman expressed that she was going into labour. At 0440D, the woman gave birth at the 1-503 in BAS at combat outpost. [[086:663]]

In another incident, in May 2006, a pregnant woman – Nahiba Jassim – was killed in a checkpoint shooting. She was being rushed to the maternity hospital in Samarra when the car was fired upon at a checkpoint; also killed was a cousin, Saliha Hassan.

One of the most striking things about the reports is the lack of followup: Only in rare cases do the units involved in the shootings update their reports with additional information about their targets.

Soldiers from the 2/12 Cavalry opened fire on a black BMW in Baghdad in July 2007 after the vehicle “failed to respond to hand and arm signals, green laser, paint ball gun, and warning shots”.

The vehicle burst into flames after being shot with a .50 caliber machine gun. The report says that “ammunition [was] seen cooking off inside [the] vehicle,” which would suggest that the car was carrying weapons (ordnance “cooks off” quickly when exposed to the heat of a fire).

But the passengers in the car were apparently a family – a man, a woman, and two children. No attempt is made to determine who the passengers were, or why their vehicle was seemingly loaded with ammunition: their remains are transported to a nearby hospital, and the file is closed.

The number of reported incidents dropped sharply after 2007, from more than 3,500 to less than 1,600 in 2008. That was due, in part, to new rules intended to protect civilians – but also because Iraqi security forces, instead of Americans, had taken over an increasing number of checkpoints. “Escalation of force” incidents by Iraqi troops are not often reported by the US military.

Editor’s note: About the documents

Checkpoints were often the scene of deadly gun battles. One report, from August 2004, describes a shootout between Iraqi police and the Iraqi national guard at a checkpoint in Babil province.

At 1750D, an ING convoy coming from the Ad-Diwaniyah did not stop at an IPs CP at grid MA 455 958. The ING opened fire on the IPs. 3X IPs were WIA, though not seriously. The commander of the Al Hillah PS and 1BG commander went to the spot immediately. After a short negotiation the ING convoy left. Then the IPs fired a few bursts at the last vehicle of the convoy.

Dozens of other so-called “green-green” incidents – Iraqi forces attacking one another – are scattered throughout the reports. The altercations typically involve soldiers from different branches of Iraq’s fragmented security services.

The reasons for the violence are often unclear. In February 2006, the Iraqi army stopped a vehicle carrying soldiers from the “public order brigades” (POB), a paramilitary force under the interior ministry. One of the POB soldiers was shot and killed; US forces investigating the shooting never did find out why.

Dozens of other reports document violent “escalations of force” between Iraqi security forces and the civilians they are supposed to protect. In July 2005, the Iraqi special police shot and killed an Iraqi pedestrian who did not stop at a checkpoint in Baghdad. They insisted that he was an attempted suicide bomber – until his family arrived and explained otherwise.

The LN family arrived and stated he is not AIF but mentally retarded. ISP [sic] still believed the IND was a suicide bomber. The family members moved forward to the LN and rolled him over exposing his abdomen. The LN had no suicide vest.

The US military started taking these incidents seriously in 2006, when General Peter Chiarelli – the then number-two military officer in Iraq – promised to investigate every one that resulted in casualties.

The reports also suggest that the US military understated the number of civilian casualties in “escalation of force” incidents. The US-based McClatchy newspaper group reported in July 2007 that the army said 429 Iraqi civilians were killed or wounded in the previous year. But the reports released by Wikileaks place that figure higher, at 567, a 32 per cent difference.

Similarly, in June 2006, Chiarelli claimed that checkpoint killings had been reduced to roughly one per week, down from seven per week a year prior.

And the incidents have continued, at a pace of at least one per week, through the end of 2009, when the documents released by Wikileaks terminate.