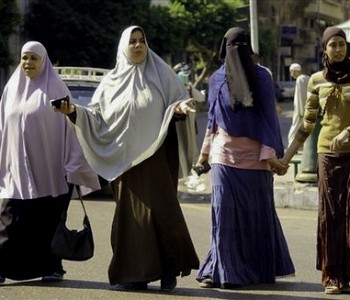 Rotana Mowafag Al-Hashimi is a Saudi abaya designer who is known for her brand both inside and outside the Kingdom. Her designs are known for their great fabrics and styles, but most importantly, the colours she chooses.

“As a child I fell in love with colours as I used to play with different kinds of fabric and just wrap it around my body adding to that some accessories,” said Al-Hashimi. “As a Saudi designer, I’m representing my country and my religion so I always make sure that my designs are decent and civilized, yet fashionable so that young Saudis look stylish and unique,” she said.

Her mission is to change the concept of black abayas and introduce Saudis to coloured ones. “I find coloured abayas refreshing especially in the heat. It makes ladies look bright and it complements their skin tones sometimes. We have to start changing this colour and we have to get out of our black shell.”

However, she has to deal with Saudi society’s stand against colourful abayas. “Since I only design coloured abayas, a lot of people are against my designs claiming that they are neither respectable nor decent,” she said. “I once bumped into a young woman who told me that her father does not agree with coloured abayas, and if she wants to design one, she has to get permission from him first and give him details about the colours and designs.”

Al-Hashimi demands a change in the society and how they look at coloured abayas. “There is nothing in Islam that states that women should stick to black. Women all over the world are wearing coloured Hijabs and that does not make them less of Muslims,” she said. “Sometimes, women wear black abayas here, but coloured ones when they travel. So, what’s the harm in wearing them here?”

Her background in interior design makes her give attention to all the small details. “I studied interior design for three years only. I didn’t graduate because I decided to divert my talent to fashion and invest in it,” said Al-Hashimi. “However, I learned a lot about colours and fabrics from interior design, which helped me a lot with designing abayas. I love to design in general, whether it’s fashion or interior design as both are about sketching and playing with colours.”

In 2007, she started with designing her own abayas, which then led to designing others. “I started making my own abayas — mostly altering or adding my own touches because I never liked them the way they were sold,” she said. “I also designed my own abayas from scratch. I choose the fabric and went to the tailor and gave him my designs. After a while, my mom’s friend came up to me and asked me to design an abaya for her, and with that, I started selling to people I knew and didn’t know.”

She even designed abayas for Saudi and international public figures. “Because of my coloured abayas and my unique designs, I was approached by Princess Haya bint Al-Hussein, the wife of the prime minister of the UAE and ruler of Dubai and daughter of the late king of Jordan, to design an abaya for her. I noticed that she always wears white and she looks so angelic in it, so I designed a white abaya with silver and gray beadings for her,” she said. “I also designed an abaya for Lady Janet Napolitano, Unites States Secretary for Homeland Security, during her visit to Saudi Arabia.

According to Al-Hashimi, updating yourself with new trends is the key to being a successful designer. “I always make sure to know about what’s in and what’s out and what colours and trends are in for every season because designing abayas is similar to designing clothes. I usually look for the colours of every season because I use them in my abaya fabrics. I used purple, green, blue and peach according to the international fashion.”

In addition to the struggles she faces with colour, she has to deal with copyright issues. “This is a big issue that people don’t talk about, but we as designers struggle with this problem because a lot of fashion’s newbies copy our designs with bad fabric and even worse tailoring,” said Al-Hashimi. “What kills me the most is that they attract customers with their cheap prices and their claim that the designs are their own.”

She added: “What they don’t know is that we spend a lot of time and go through a really long process of brainstorming, sketching, buying fabric and tailoring. They think it’s easy to come up with new designs, and that’s why they keep stealing our designs and get away with it.”

Her future plan is to go global by opening boutiques all over the world. “I already design for women outside the Kingdom and I receive phone calls from the United States and Europe asking me to design Hijab clothes for them. I want to design for every woman who is willing to wear fashionable and coloured abayas, whether it’s inside or outside the Kingdom.”