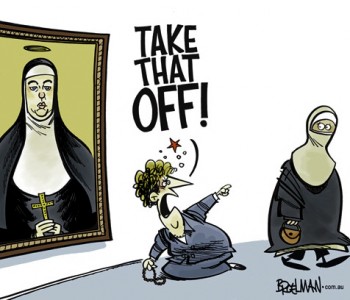 There’s been much coverage of this in the media and in society; pictures of Mary MacKillop were projected onto the pylons of the famous Sydney Harbour Bridge in celebration and a number of Australian Catholics went to the Vatican for the big announcement. There’s also been some criticism and scorn of the event, but what’s interested me is the way many otherwise unreligious Australians have been enthusiastic about the news. Most Australians might not be Catholic, and many may even be quite sceptical of religion, but they love that an Aussie girl has finally been canonised. As the media reports say, upon the Pope’s announcement, there were cheers of “Aussie Aussie! Oi Oi Oi!” from the crowd.

In Australia (like elsewhere), we’ve had a few rounds of the Burqa Ban Debate, and no doubt it will come up again. Often, it’s discussed under a “It’s Un-Australian!” banner. The “They’re trying to import their ways onto us with their funny, confronting clothing” line.

So, this cartoon by Broelman, depicting Mary MacKillop was particularly appealing to me, about what we accept, what’s legitimately “Australian”, and who gets to decide. Especially (as is so often the case), when it comes to women’s attire. 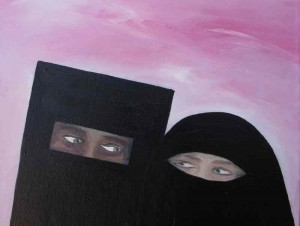 A similar angle was taken up by another artist, this time focusing on the prized historical figure of Ned Kelly. Ned Kelly is lauded as an Australian anti-authority hero (which is somewhat puzzling given the fact that he was a criminal and killer) by many, who is probably best recognised by his unusual helmet:

I think these were very clever. So often, the artist can speak a truth to its society more clearly and unflinchingly with one image than a thousand politicians or public speakers.