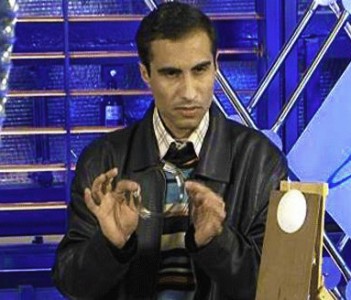 Stars of Science, a pan-Arab reality program shown in 15 countries opens the stage for a six-week battle after naming 16 second-season finalists on Sunday night, UAE-based daily The National reports.

The show which aims to spark interest in science and technology in the Arab World has the students bidding to come up with new ideas and approaches to common yet complex problems.

“This is a lifetime opportunity and these innovators are very anxious, hoping to prove to the world that their idea is valid, is scientifically sound and can be packaged into something useful to society.” said Fouad Mrad, a long-time engineering professor at the American University of Beirut, and one of the program’s jurors.

“As long as they work hard, stay on track and are committed to their goal, we should see an exciting competition,” Mrad added.

Stars of Science started its first seasons in 2009, and the first prize went to Bassam Jalgha, a Lebanese mechanical engineer who created “Dozan”, an automated tuning device for stringed instruments.

From Jordan, Mazen Salah, developed Staticap, a non-rotating hubcap for cars that can display a team logo, flag, or whatever the owner would like.

“In today’s world the need for uniqueness and related self-expression has never been stronger,” Salah said. “StatiCap fulfills this need.”

Proof-of-concept, engineering, design and marketing are the criteria judges will look for to filer down 16 of the semi-finalists into the four winners on October 25.

Abdullah Abou Zeid from Egypt, co-invented a new robot rotational joint. From Qatar Ahmad al-Khater, devised a method to harness magnetic energy to use as power; while Maha al -Amro of Saudi Arabia developed an air-conditioning vest for outdoor workers.

An initiative by Sheikha Mozah bin Nasser al-Misnad, the wife of the Qatari emir, Stars of Science is filmed in Qatar Science and Technology Park, and produced by Qatar foundation.

The current season began on October 3 and will end with on November 28.