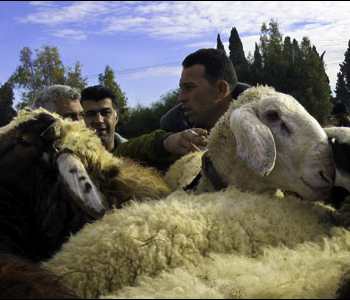 In around one month’s time Muslims from across the world will celebrate Eid al-Adha by sacrificing a sheep or a goat. Eid al-Adha, the ‘Festival of Sacrifice’, commemorates the occasion when god asked Prophet Ibrahim to sacrifice his son Ismail as an act of obedience and at the last minute his son was replaced with a sheep to slaughter. Although festival is spiritual event, major elements of it include eating lots of meat which raises the question: where will people be getting their meat from?

Traditionally, many Muslim families would buy a sheep or goat weeks in advance and slaughter it themselves on the day. Today, however, that practice is increasingly rare in the Middle East and almost non-existent in Muslim communities in the west. Many will now buy their meat from a butcher or worse their supermarket which ultimately disconnects them from the fact that their meat comes from somewhere; that an animal was sacrificed to feed them.

One of the earliest memories I have is watching a sheep get slaughtered in our front garden in Jordan to celebrate Eid al-Adha. I must have been around 5 or 6 years old at the time and although it should have been traumatic, I can honestly say it wasn’t. A sheep had been brought into our house a couple of weeks before and it stayed on our flat roof upstairs where it had enough food and water to keep it happy. My brother and sister would occasionally go up to keep it company but I wisely kept my distance. A couple of days before Eid it was brought down and led into the front garden- come Eid day, it was quickly and efficiently slaughtered.

Now one of the things that sticks in my mind is that there was a lot of blood and it sprayed everywhere- on the walls, the steps, the porch and the windows. But the blood was washed away and the meat cut up and distributed to neighbours and poor families. I wasn’t left feeling that what had happened was shocking, terrible or that the animal had suffered. It’s was where our meat came from and I accepted that as a fact. [It would be years down the line when I watched a video about factory-farming that I felt disturbed and shocked at the treatment of animals.]

Where Does Your Meat Come From?

These days, meat is bought nicely wrapped in plastic and if you asked, most kids probably wouldn’t know where their meat came from. In the UK, I asked a young Muslim girl aged six where she thought tuna was and after some thinking she asked back, ‘Is it like a type of bread?’. She’s quite a smart girl but where her food comes from just isn’t something she’s ever needed to think about before. Is vegetarianism the answer? Some have put convincing arguments for vegetarianism within Islam as a way to solve our problematic relationship with meat but ultimately, not everyone will embrace it and so other solutions are needed.

Bringing people closer to or even reminding them of, where their meat comes from is one way to do this. People always want lots and lots of cheap meat but meat shouldn’t be cheap because it comes from taking an animal’s life. Around a year ago, I was speaking to Ali Carr, a Muslim farmer who sells organic halal meat in the UK and after recalling the horrific conditions of factory-farming and the small scale nature of organic farming he admitted that: “If we try to follow the design the our maker has laid for us on how raise livestock, then we may have to eat less meat in the future. It’s better to save up and eat meat that tastes better, is more nutritious and halal rather than eat factory farmed meat every day.”

This Eid, I hope people take the time to think about where their meat came from, and the conditions the animal lived through before it made to their plate.