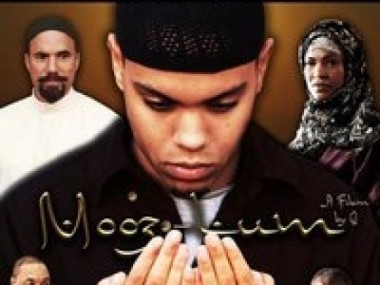 The makers of a new movie about family life for black Muslims in America want to highlight challenges facing followers of Islam, just as Spike Lee’s “Do the Right Thing” revealed the racism and harsh realities facing black youth in Brooklyn two decades ago.

“MOOZ-lum” was filmed in Michigan, which has a large Muslim population, and premiered to packed theatres at the Urbanworld Film Festival in New York on Friday.

“I hope people can walk out of the theater thinking more and trying to understand what we’re facing here,” said director Qasim Basir, adding the movie’s portrayal of discrimination mirrored his own Muslim-American experience.

Basir said a lack of cinematic depictions of Muslim Americans also inspired him to make the movie.

“I’m hoping to give Muslim-Americans a film that reflects them. I want it to be something the audience can look at and say, ‘This represents me,’” he told.

The movie, which has yet to find a distributor and so is not in commercial cinematic release, emerges amid a heated dispute over a planned Muslim cultural centre in New York. Organizers of the centre, which would be two blocks from the World Trade Centre site and will include a prayer room, say it is meant to build bridges. Critics say the proposed location is insensitive to victims of the Sept. 11 attacks and should be changed.  Urbanworld founder Stacy Spikes said the buzz surrounding “MOOZ-lum” had been helped by the debate.

“MOOZ-lum” tells the story of a college student Tariq, played by Evan Ross, in 2001. Tariq struggles with balancing his Muslim faith and his newfound freedom on campus.

Flashbacks to his childhood reveal years of bullying. Then, just days into his freshman year, the Sept. 11 attacks alter life for Tariq and his family. “People can see this family is like any other family,” said the movie’s star Ross. “When you don’t know about something, it seems dangerous and that’s how hatred starts.”

US mistrust of Muslims has grown in recent years. A Pew Forum on Religion and Public Life poll released in August found the number of Americans with a favourable view of Islam was 30 per cent, down from 41 per cent in 2005. Roger Guenveur Smith, who plays Tariq’s father, compares “MOOZ-lum” with another film he acted in — “Do the Right Thing.”  The 1989 film explored race relations in Brooklyn and was released weeks before the fatal shooting of black youth Yusef Hawkins in an Italian section of the same borough.

“’Do the Right Thing’ continues to have an impact because the filmmaker did not shy away from the issues,” said Smith.

“No one could have predicted the tragedy that would take place in New York City the summer (of) ‘Do the Right Thing’ … and no one could have predicted when we were getting ready to premiere ‘MOOZ-lum’ that we would be embroiled in this tremendous debate about… freedom of religion.” “Do the Right Thing” was a box-office hit, nominated for an original screenplay Oscar and declared “culturally significant” by the US Library of Congress.

Basir believes critics of the proposed centre in Lower Manhattan are poorly educated about Islam. So, he would like his film to be played in universities and schools. “I would like it to humanize a culture and a faith that has, for a while now, been attacked,” he said.

Producers of “MOOZ-lum,” which features Danny Glover as the opinionated dean on Tariq’s campus, say it will be featured at the Chicago International Film Festival in October.