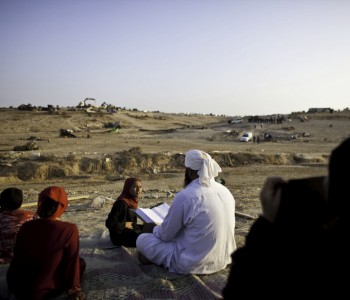 You could easily miss the thin, gravel road that leads to Al Arakib, a Bedouin village in the north Negev. It is a bit ironic, given the enormity of the struggle there and its deep implications for the Jewish state.

Israeli forces have razed the village five times since late July, sparking cries of ethnic cleansing and leaving more than 300 Bedouin homeless. But the equally determined residents, along with a handful of Jewish activists, continue to rebuild.

The government claims that Al Arakib was abandoned and, as such, belongs to the state. Israel calls the Bedouin squatters who “infiltrate” the area and settle it illegally. According to the state, these people must be removed to make way for a forest to be planted by the Jewish National Fund.

Villagers, some of whom hold Ottoman-era deeds to the property, say that the Israeli army asked them to leave temporarily in 1951. Believing they would be able to move back, they left. It was then, they say, that the state declared Al Arakib abandoned and expropriated it.

‘Peace in your own house’

But the Bedouin maintained a connection to the earth. They continued to cultivate the village land, harvesting olives, pomegranates, and other produce. And more than a decade ago, they rooted themselves in Al Arakib once again, building houses and families.

A graveyard, established more than a century ago, also signals the villagers’ attachment to the area.

Speaking just days after his home was demolished for the fifth time, Aziz Abu Mudegem points towards the cemetery and remarks: “My grandfather was buried here in 1908. He was the first to be buried here.”

Abu Mudegem, a member of the al-Turi family, adds: “We have a purchase agreement from Ottoman times. The British came after that and, now, our government.” 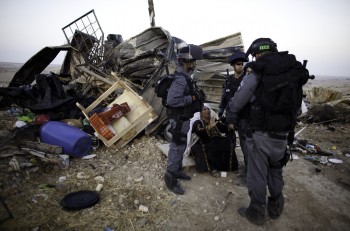 Their story is emblematic of the Palestinian struggle; it also touches on questions about Israel’s treatment of non-Jewish citizens.

Facing the ruined houses, Ismail Mohammed Abu Mudegem al-Turi takes his wallet from his pocket. He pulls out his Israeli identity card and tosses it onto the sand. “I want someone to take this,” he says. “What do I need it for? It doesn’t protect me. It’s just paper in my pocket.”

“We don’t have water. We don’t have electricity. We don’t have honour,” al-Turi says, referring to both the demolitions and the scores of unrecognised Bedouin villages in Israel. The continued destruction of Al Arakib, he says, is like “declaring war on the people”.

Just days before the village was destroyed for the first time, Binyamin Netanyahu, the Israeli prime minister, declared that “an international campaign is being waged against the definition of Israel as a Jewish state …. The significance of these attacks is that various elements are liable to demand their own national rights and the rights of a state within the state of Israel – in the Negev, for example, if it becomes a region without a Jewish majority”. Netanyahu added that such a change would be “a real threat” to the Jewish state.

Al-Turi simply remarks: “Go make war with Syria, not with your own people. If you want peace, do it first in your own house.”

Battling the system, not the bulldozers

Oren Yiftachel, a geography and urban studies professor at Ben Gurion University and the author of Ethnocracy: Land and Identity Politics in Israel/Palestine, comments: “Citizenship is empty of any substantive content if you don’t have basic services or recognition.

“The land issue [at Al Arakib] serves as a reminder that citizenship in Israel is very unequal.”

Yiftachel has served as an expert witness in the lawsuit filed by Nuri al-Uqbi, another Bedouin who lays claim to Al Arakib. Some observers say that al-Uqbi’s case could open the door for dozens more like it. And such proceedings could call into question the validity of the Jewish claim to the whole of the land.

While al-Uqbi lives in a nearby town, preferring to battle the system rather than bulldozers, his case is deeply connected to the al-Turis’ fight. Yiftachel explains that the al-Turis bought the land from the al-Uqbis and the al-Huzzails in 1907, during Ottoman rule, and in 1929, under the British mandate. Together, the two purchases totaled 1600 dunams.

When asked about the continued destruction of Al Arakib, Yiftachel responds: “My position is history. The land belongs to the al-Turi family … it should be maintained and the property rights should be respected. [Israel] claims it is state land by the fact that [the Bedouin] never registered it [with the British]. But in court I showed that the British allowed them to hold the land according to [the Bedouins’ own] traditional law.”

Yiftachel explains that the Bedouins enjoyed a similar autonomy under the Ottomans. And this accounts for the lack of registration from that era, as well.

The state’s expert witness is Ruth Kark, a professor of geography and the Middle East at Jerusalem’s Hebrew University. Speaking to the Israeli daily Haaretz, she argues: “[The Bedouin] came to the Negev and took control of the land by force of arms.”

But the same article discusses “inconsistencies” between Kark’s court testimony, which disputes Bedouin claims to the land, and statements from her 1974 book about early Jewish settlement of the area.

Under the Ottomans, Kark wrote: “Land ownership relied on a tradition that was recorded in deftars, notebooks that were held by sheikhs and mukhtars.” As property changed hands, it was noted in these ledgers, “which the Bedouin treated with respect and trust”. When this discrepancy emerged in court, she retracted her early writing. 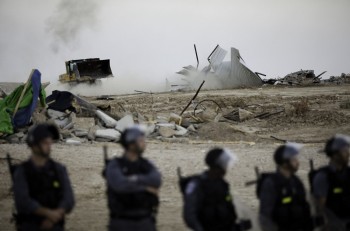 Kark declined Al Jazeera’s request for an interview. “[At] this stage of the court proceedings, I prefer not to do so,” she responded.

That the judge has yet to issue a decision about the case makes the demolitions “malicious,” says Yiftachel. “While this is debated, let the people live there.”

‘Eating from one plate’

Yiftachel points out that at as Israel has sought to push the Negev’s 175,000 Bedouins into economically and socially depressed towns – a trend that began in the early 1970s – it allows Jews to settle the area.

“The Israeli government is constantly trying to say that this is a zero sum and that if the Arabs get human rights, the Jews will be denied. This is wrong, you can have both.”

Ramon says he feels a responsibility to stand against any injustice the government commits in his name. He has been with the village since the beginning and witnessed the first demolition, when some 1,500 police came to evacuate the 300 residents.

“They came with power like they thought the citizens would open war against them,” Ramon says.

The police forcibly removed the villagers, who resisted non-violently. And then they destroyed Al Arakib.

“They ruined all the houses, they tore out the trees, they knocked over all the water tanks. There were hen cages. They ruined everything.”

“It was sad to see people behaving like that,” Ramon says. “I have different expectations for people.”

Like other villagers, he emphasises that he is not against Jews. “God decided we would be here together, so we have to guard each other,” he says. “I think that we have to stand hand in hand, build together, and eat from one plate.”