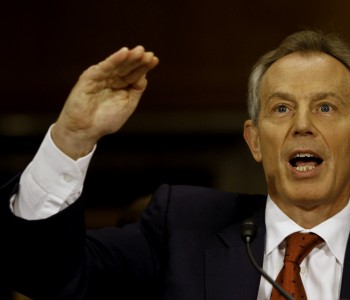 When former British Prime Minister Tony Blair and the Washington Institute for Near East Policy (WINEP) get together, you know that something slightly frightening will happen – given that WINEP is a leading voice of pro-Israeli sentiment in Washington and Blair is the world’s leading example of neo-colonial Western political leadership that speaks nicely of making peace in the Middle East but in reality mostly makes war or ignores the real causes of the conflict at hand. We were not disappointed last Tuesday when WINEP awarded Blair its 2010 Scholar-Statesman Award. His remarks clarified a main reason why Western-Arab-Asian tensions persist, and even worsen.

Blair’s basic point was that we need a revolution in our thinking to defeat Islamic extremism by “defeating the narrative that nurtures it … The practitioners of the extremism are small in number. The adherents of the narrative stretch far broader into parts of mainstream thinking.”

And what is this narrative? It is that Islam is basically oppressed by the West, disrespected, and treated unfairly, that the military action we took post-9/11 was against countries because they are Muslim, and that in the Middle East we ignore the injustice done to Palestinians in our desire to support Israel because the Palestinians are Muslims and the Israelis predominantly Jews. It is a narrative that now has vast numbers of assembled websites, blogs, and organizations. And of course, many of those that agree with this narrative abhor the terrorism. But as the support across the Middle East for the Muslim Brotherhood shows, far too many buy into far too much of the analysis of the extremists, if not their methodology … So in my judgment, what we should be doing instead is confronting the narrative head-on, forming an alliance across the face and across the divides of culture and civilization to defeat it.”

If Tony Blair deserves an award, it should be for cramming the maximum number of misconceptions, falsehoods and political blind spots for his own conduct into a single statement. His emphasis on the extremist “narrative” that he sees prevailing around the Islamic world is partly grounded in reality, as there are terrorists and extremists who do charge the US, UK, Israel and others in the West with being anti-Islamic. Public opinion in the Arab world does worry about what it perceives to be anti-Islamic sentiments and actions among leading Western powers, when it sees their armies and diplomats conduct policies that seem consistently to apply standards to Arabs and Muslims that are not applied to most others around the world.

Blair fails the statesman’s and the scholar’s primary responsibility of accurately analyzing the real causes of these sentiments, and correctly gauging their intensity, linkages and consequences. He makes the common mistake that is increasingly prevalent in the US and other parts of the West – lumping together terrorist fanatics like Al-Qaeda with mainstream Islamists like the Muslim Brotherhood and also with broad swaths of public opinion in Arab-Asian lands. His major failure – in office and still today – is that he refuses to explore seriously or accept in any manner that extremism and anti-Israeli, anti-British or anti-American sentiments in Arab-Asian and Muslim-majority lands are predominantly a response to the realities that these lands have experienced at the hands of American, British, Israeli and other allied foreign policies.

Neither Blair nor his WINEP hosts want to grapple with the uncomfortable fact that policies undertaken during Blair’s years in office, and the attitude that he continues to display today toward the nature and causes of political extremism in the Arab-Asian region, are among the elements that contribute to the ever rising cycle of tension and violence that continues to threaten both worlds – as witnessed by this week’s heightened terror alert in England and parts of Europe. Israeli policies toward Palestinians and other Arabs – occupation, colonization, mass imprisonment, assassinations, the siege and strangulation of Gaza – in particular are a major reason for widespread Arab resentment of the US and UK governments that largely acquiesce in those policies while making happy talk about peace and justice for all.

The Blair mindset seems to say that Americans, Israelis, British and other Western people can react forcefully with war and sanctions to the policies that anger or hurt them, while Arabs, Asians and Muslim-majority societies are not allowed to activate a similar human condition and reaction.

By taking away our capacity as Middle Easterners and Asians to react to, and oppose, the actual policies on the ground of Israelis or Americans, and ascribing public sentiments in our region to faulty schooling or some mass misconception about Western anti-Islamism, Blair reminds us of precisely why the world rose up in the early and mid-20th Century against European colonialism and racism that denied much of the rest of the world both its political rights and its fundamental humanity.