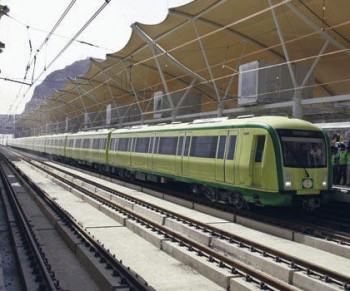 Hundreds of thousands of Muslim pilgrims will ride a new railway metro transport system for the first time when they converge on the Saudi holy city of Makkah next month, according to the local media.

The Gulf Kingdom, where millions of Muslims from around the world gather every year for their annual haj (pilgrimage) season, has just completed the first stage of a train that will eventually transport nearly two million people.

Officials said around 170,000 pilgrims would be able to use the Chinese-built metro during this haj season, which is expected to start in mid November.

“The train will have a capacity to transport around 170,000 pilgrims this year, mostly from Saudi Arabia and nearby Gulf countries,” said Prince Mansour bin Mutab bin Abdul Aziz, Saudi Arabia’s Minister of Municipal Affairs.

The Prince was speaking on Tuesday following a 10-minute test trip by the train through Makkah, Islam’s holiest shrine. His trip was apparently intended to refute claims by some Saudis that it was not up to international standards.

The remarks by Saudi businessmen, citizens and newspapers about the train’s risks followed reports that one of its cars fell off the rails during a trial drive in the holy city last week without causing any casualties.

Prince Mansour said his ministry has set up a committee to study transport fees for passengers using the train that will transport pilgrims through Makka’s holy sites during the four-day Haj season.

Saudi Arabia has allocated nearly SR6.7 billion (Dh6.6 billion) for Makkah’s first train project, which will eventually have the capacity to transport around two million Muslim pilgrims when it is completed within two years.

Newspapers said the train would launch services this year for the first time in Makkah’s history, adding that it would largely contribute to easing road congestions caused by the accumulation of thousands of cars near Makkah.

“The train will have the capacity to transport 500,000 pilgrims when the second phase is completed next year and two million when the third and last phase is finished in 2012…its total cost will be around SR6.7 billion,” said Jamil Al Qirshi, Director of the Saudi Haj (pilgrimage) commission in Makkah.

Dubbed the “Holy Rituals Train”, the project is part of a costly programme by Saudi Arabia to tackle massive traffic congestions in and around the city and facilitate access to all sacred sites in Makkah.

The train project, initiated three years ago, followed a series of incidents that have killed thousands of pilgrims in stampedes, building collapses and other accidents during the few days of the Haj season.

More than two million Muslims from Saudi Arabia, the Gulf Co-operation Council countries and other nations descend on Makkah every year to perform Haj.

China Railway Construction Corp, part of a Saudi-French-Chinese consortium which won the contract, is carrying out the project, involving nearly 5,000 workers. The train is the Gulf’s second metro system after the Dubai Metro.

“The train project is part of ongoing efforts under the directives of His Majesty the Monarch to alleviate the suffering of the pilgrims and facilitate their holy mission. Several projects have been implemented in this respect and more would be carried out in the future,” Alriyadh newspaper said.

The government has spent more than SR20 billion on development projects in Makkah over the past few years following an increase in accidents and criticism over lack of proper services for pilgrims.

The projects involved the construction of buildings on top of a surrounding hill, expansion of the area on top of the holy Mount Arafat, development of the sewage and fire-fighting systems, upgrading health and transportation services and a SR4.2 billion expansion of the space and roads leading to where Muslims perform Ramyi Aljamarat (stoning of the devil), the scene of some deadly accidents over the past few years.