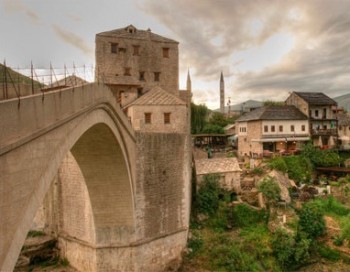 When Bosnian diplomat Ensar Eminović provocatively declared “Saya buatan Malaysia” (“I am a product of Malaysia”) to the Malaysian press last year, his assertion must not be simply seen as an attempt at securing investments.

It is, in fact, symptomatic of the shape of things to come. With a significant number of its top leaders educated in the Southeast Asian nation, Bosnia-Herzegovina is on a steady course to becoming the Malaysia of the Balkans.

Eminović figures among some 300 Bosnian elites who have graduated from Malaysian universities. Unofficially coined the “Bosnian Mafia” in Malaysia, this highly influential group comprises “ambassadors, CEOs of major companies and up-and-coming politicians” by Eminović’s own admission.

As they work towards rebuilding a nation ravaged by the Balkan wars of the early 1990s, this group’s most significant impact will be on Bosnian religiosity, especially its society’s imaginings of Islam.

After all, most were trained at the state-sponsored International Islamic University Malaysia (IIUM), whose prerogative is to “integrate Islamic revealed knowledge and values in all disciplines” so as to bring about “the restoration of the Ummah’s leading role in all branches of knowledge”.

If Bosnia’s appropriation of Malaysian Islam continues, then its practice of public Islam could develop in several ways.

First, Bosniaks (or Bosnian Muslims who make up about 45% of its nearly 4 million population) might embrace the “otherworldly” but inclusive aspects of Malaysian Islam inspired by Sufi mysticism. Second, they could import a reformist version of Malaysian Islam that does not see a conflict between modernity and faith, which has been championed these days by opposition leader Anwar Ibrahim. Here, the IIUM has produced progressive Malaysian Muslim figures like human rights lawyer Malik Imtiaz Sarwar.

A third option is a heightened sense of Islamic consciousness promoted by the IIUM, whose raison d’être makes it a strong propagator of the “Islamisation of knowledge” project. This strain of Islamic thought was first conceptualised by the Malaysian Islamic thinker, Syed Naquib Alatas, and later expanded by the Palestinian philosopher Ismail al-Faruqi.

Islamisation upholds a dichotomy between disciplines that are “secular” (for example, economics and Marxism) and those that are “Islamic” (like tawhid or studies on the oneness of God). It aims to reinterpret the former according to ethics of Islam, giving birth to new fields like Islamic literature and Islamic science.

There is some indication that Bosnia is opting for Islamisation over Sufism and reformism, at least officially.

Three Malaysian Islamic banks have reportedly set up operations in Bosnia this year. Meanwhile, a Malaysian state-linked firm last year signed an agreement with the Širbegović construction firm to codevelop Bosnia’s first halal park. It sees this investment as paving the way for Malaysian companies to “tap the markets to other countries in Europe, particularly when Bosnia becomes part of the European Union, within the next five years”.

Islamisation is also underway in Bosnia’s higher-education sector. Islamic leaders led by grand mufti Mustafa Cerić are working closely with the International Institute of Islamic Thought (IIIT) to establish an Islamic university. A close partner of Malaysia’s IIUM, the IIIT is a US-based non-profit organisation working towards Islamising “secular” spheres. It was first set up with seed funding from the Muslim Brotherhood.

While most Bosniaks traditionally see Islam as a cultural identifier, it is not unlikely that the Islamic turn of its elites will trickle down to the masses as faith leaders report a sense of religious revival among its rural folks.

The implication for Bosnia’s future is twofold.

Locally, leaders must endeavour not to let Bosnia degrade into social tension the way Malaysia had. The latter saw Islam assume an ethnic slant to politically differentiate Muslim Malays as natives from non-Muslim Chinese and Indian minorities as settlers in an us-versus-them dichotomy.

Last weekend’s elections, though, have shown some encouraging signs on the part of Bosniaks, with most voting for the moderate Bakir Izetbegović over the nationalistic Haris Silajdzić. The former is a strong propagator of dialogue between the nation’s deeply divided ethnic groups. However, the spectre of ethnic conflict still hovers as Bosnia’s minority Serbs voted for the hardliner Milorad Dodik, who favours separatism of Bosnia’s Serb-run Republika Srpska.

Given that ethnic strife between Bosnian Serbs and Bosniaks had characterised the Balkan conflict, there is a real danger that Islamisation could reignite this.

The onus to prevent these now lies on Bosnia’s young Turks to appropriate Malaysian Islam judiciously.