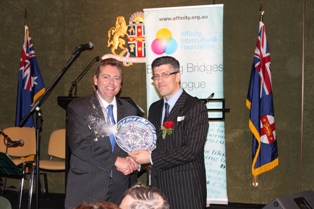 On Thursday the 2nd of September 2010, at a gathering in NSW Parliament House with over 150 guests in attendance which comprises religious leaders, academics, politicians, educators and various other individuals from differing backgrounds, Affinity Intercultural Foundation presented its annual Australian Affinity Awards. These awards recognise the efforts of individuals who actively promote intercultural dialogue and the removal of religious prejudice in the Australian community. Previous year’s interfaith award receiver, Cardinal George Pell was also present amongst the audience.

Notable award receivers included The Honourable Richard Torbay MP, NSW Parliament Speaker of the House, who was awarded with the Public Officer award; Bishop David Walker, Bishop of Broken Bay Catholic Diocese, as he has been an active advocate of Interfaith Dialogue; and Professor Rosemary Johnston, Dean of the Faculty of Education at the University of Technology Sydney (UTS) for her contribution in the field of education. Prof Johnston also participated in 2010 Affinity organised “Spirit of Anzac” Study Tour of Turkey, where she also gave a lecture at Fatih University in Istanbul.

The media award was presented to Ms Jacqueline Maley from the SMH for her contribution to the field of journalism, seeking balanced and ethical reporting. The education award was presented to Mr John Oldmeadow for his outstanding efforts in promoting education, shaping the views of many colleagues and students to eradicate bigotry and foster harmony and respect.

The Muslim community in Australia have been noticeably embracing the importance of integration, interfaith and understanding of the ‘other’ service. Mr Hany Amer, who was awarded this year’s Youth Award, is the incumbent President of the Egyptian Islamic Council. He along with his council have focussed on educating the Muslim youth to integrate better to Australian society. Sheikh Fedaa Majzoub, who is from the Australians Imams Council, has been instrumental in bringing a more balanced and contemporary approach to the Imam’s Council, was awarded with the Muslim Community Award.
The Hon Richard Torbay MP was awarded in the area of Public Service. Richard’s commitment and dedication to serving the NSW Parliament as its Speaker, greatly contributes to building a balanced Parliament.

The keynote address by Professor Gail Whiteford, Pro Vice Chancellor (Social Inclusion) Macquarie University, focused on the theme “The Importance of Social Inclusion in a Multicultural Multifaith Society”, which is also the department she heads at Macquarie University. Gail says, “…The work that Affinity is doing to create dialogue between groups is healthy and encouraging and a positive way forward for all Australians.”

These words by Prof Whiteford were stated in an environment where Affinity has been instrumental in setting ground breaking initiatives such as the Ramadan Iftar dinner being held at the peoples parliament of NSW. Importantly, many of those listening were eating their first meal since dawn, as the dinner marked the end of the day’s fasting, a practice required by all observing Muslims during the month of Ramadan. The sharing of a meal is considered in all cultures of the world to be one of the most significant gestures of accord and goodwill.

In all, 7 awards were presented at the dinner co-hosted by the Affinity Intercultural Foundation, an organisation founded in 2001 by a group of young Australian Muslims specifically to promote cultural and religious awareness and understanding across the entire Australian community.

According to Mr Mehmet Saral, Affinity’s President, “The Awards recognise individuals for their significant contribution in bringing together Australians, and improving understanding between Australians of diverse religious and cultural backgrounds”.

Rosemary Ross Johnston is Professor and Head of Education at the University of Technology Sydney. She is also Founding Director of the Australian Centre for Child and Youth: Culture and Wellbeing. She was previously Director of the Centre for Research and Education in the Arts and Director of Teacher Education at UTS. In 2000 she was Guest Research Professor at Åbo Akademi University Finland, employed to work with students in an innovative multicultural doctoral program.

She is widely published in the area of literacy and children’s literature theory and pedagogy, and her work has been translated into several languages, including French, Spanish, German, Japanese and Arabic. It has appeared in both local and international journals. She is the invited author of many chapters and is currently preparing a book on the work of 2010 Astrid Lindgren Award winner, David Almond.

Speaker of the Legislative Assembly of NSW Member for Northern Tablelands. Richard Torbay was elected as an Independent Member for Northern Tablelands on 27 March 1999 and he was elected as Speaker of the Legislative Assembly of NSW on 8 May 2007. He is also the Regional Representative for the Commonwealth Parliamentary Association. He is a former Mayor and Deputy Mayor of Armidale, serving on the Armidale City Council from 1991 to 1999.

Jacqueline Maley began her career at the Sydney Morning Herald in 2003. She worked in features and as a health and medical reporter before travelling to London to work for The Guardian in 2006.
She returned to the SMH to cover workplace relations before going back to London, where she filed news and features for the Sun Herald, Sunday Age and Sydney Morning Herald. On returning to Australia in 2009, she worked for the Australian Financial Review for a year before returning to the Herald as its religion reporter.

John was introduced to interfaith and intercultural activities through Harmony Day and other activities within Uniting Church schools and then through Mehmet Saral to the work of Affinity. An Affinity tour to Turkey was a life changing experience for John. One particular outcome from this experience was the desire to introduce the Uniting Church schools, through Chaplains and teachers of Religious Education to possibilities of individual student exchanges, school trips and interfaith experiences. The first step in this mission was the achieved earlier this year with an Affinity led tour for Uniting Church School Chaplains and R.E teachers. Already it seems that there will be new ideas, tours, exchanges and events emerging from this initial tour. The core principles of Affinity are being lived out in these developing opportunities and relationships.

He was Lecturer at Al-Fath Islamic Institute; Al-Azhar University (Egypt), Damascus Campus. Syria (1997-2007).
Since returning to Australia in 2008, he has been involved in many areas in assisting the community to help it develop and integrate better to Australia. These roles include:

* Lecturer /Presenter for the HSC Study of Religion Seminars organized by the Islamic Council of NSW ( 2008)
* Presenter/broadcaster on the Voice of Islam Community Radio Station dealing with contemporary issues such as challenges facing Australian Muslims and conversations around new ways of dialogue and engagement in a culturally and religiously diverse society. (2008)
* Host of a special program entitled “undercurrents” which deals with global and local issues interviews of intellectual think tanks; religious scholars and world leaders to ensure a broad-spectrum of perspectives on matters of importance to our humanity.(2008)
* Religious advisor to the Risalah College
* Religious advisor to the Islamic council of NSW on curriculum development and matters of dialogue and community engagement. (2208)
* He is current member of the Australian National Imams Council (ANIC)

Hany Amer was voted President of the Islamic Egyptian Society of NSW in 2009. He was instrumental in the expansion of the Egyptian Muslim community run school, Arkana College in 2010. He works as National Sales and Marketing Manager at Rohlig Sydney. He was the Rohlig Australia employee of the year in 2007.