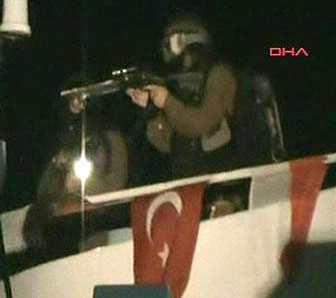 A United Nations panel of human rights experts has accused Israel of war crimes through willful killing, unnecessary brutality and torture in its “clearly unlawful” assault on a ship attempting to break the blockade of Gaza in May in which nine Turkish activists died.

The report by three experts appointed by the UN’s Human Rights Council (UNHRC) described the seizure of MV Mavi Marmara, a Turkish vessel, by Israeli commandos as illegal under international law.

It condemned the treatment of the passengers and crew as brutal and disproportionate. It also said that the Israeli blockade of the Palestinian enclave is illegal because of the scale of the humanitarian crisis in Gaza.

“There is clear evidence to support prosecutions of the following crimes within the terms of article 147 of the fourth Geneva convention: wilful killing; torture or inhuman treatment; wilfully causing great suffering or serious injury to body or health,” the report said.

“A series of violations of international law, including international humanitarian and human rights law, were committed by the Israeli forces during the interception of the flotilla and during the detention of passengers in Israel prior to deportation.”

Israel swiftly dismissed the accusations as “politicised and extremist”. But the report is likely to be welcomed by Turkey which has dramatically cooled once-close relations with the Jewish state since the attack on the ship.

The 56-page report – compiled by a former UN war crimes prosecutor, Desmond de Silva, a judge from Trinidad, Karl Hudson-Phillips, and a Malaysian women’s rights advocate, Mary Shanthi Dairiam – accuses Israeli forces of various crimes including violating the right to life, liberty and freedom of expression, and of failing to treat the captured crew and passengers with humanity.

“The conduct of the Israeli military and other personnel toward the flotilla passengers was not only disproportionate to the occasion but demonstrated levels of totally unnecessary and incredible violence. It betrayed an unacceptable level of brutality,” the report said.

The UN security council is expected to debate the findings on Monday.

The report does not have any legal force and the UN human rights council, which has been accused of a disproportionate focus on Israel, is viewed with scepticism by many western countries because it is dominated by the developing world.

But the report will be a further severe embarrassment to Israel after the assault on the ships brought widespread international condemnation even by generally sympathetic countries and breached relations with Turkey.

Israel, which refused to co-operate with the inquiry, said the report is biased.

“The Human Rights Council blamed Israel prior to the investigation and it is no surprise that they condemn after,” said Andy David, a spokesman for the Israeli foreign ministry.

Israel has claimed that its troops only resorted to force and opened fire after coming under attack by activists with metal bars, axes and wooden clubs. The pro-Palestinian activists said they were defending the ship from what amounted to a pirate attack on a vessel in international waters.

The raid prompted an international outcry and focused attention on the blockade of Gaza. Israel has since lifted most of the restrictions on the flow of medicines, food and many goods into the territory but still maintains a ban on some items, such as building materials, on the grounds they can be used to manufacture weapons.

Israel is working with another UN inquiry under the former leaders of New Zealand and Colombia, Geoffrey Palmer and Alvaro Uribe, that is still in progress.

The Jewish state is also carrying out its own inquiry into the attack on Mavi Mamara.

Last month, Israel’s military commander, Lieutenant General Gabi Ashkenazi, defended his forces’ use of live ammunition during the assault on the ship, saying that commandos had not expected to meet such violence from the activists and were forced to defend themselves when they came under attack.

“Israel is a democratic and law-abiding country that carefully observes international law and, when need be, knows how to investigate itself,” the foreign ministry said in a statement. “That is how Israel has always acted, and that is the way in which investigations were conducted following Operation Cast Lead, launched to protect the inhabitants of southern Israel from rockets and terror attacks carried out by Hamas from Gaza.”

Fawzi Barhoum, a spokesman for Hamas, said that the report is further evidence that Israel’s occupation of Palestinian territories violates human rights “not only against Palestinian people but against innocent people who came to show their sympathy”.

He said the report should be used as the basis for international prosecutions of Israeli commanders responsible for the attack.