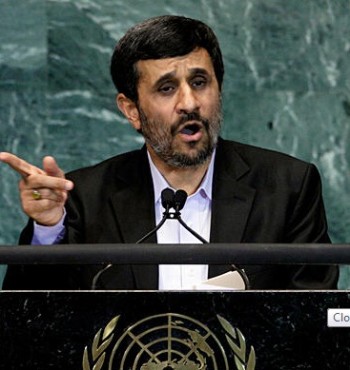 Iranian President Mahmoud Ahmadinejad announced from the United Nations in New York Thursday that Iran will host an international conference on terrorism in the coming year that among other things will discuss who really carried out the 9/11 attacks.

Mr. Ahmadinejad, who delved into the 9/11 tragedy in the context of a speech focused on what he called the “crisis” facing capitalism and the Western-dominated world order, said history will record that a failing world dominator used the attacks as a pretext for occupying two countries, Afghanistan and Iraq. Citing a list of conspiracy theories over who destroyed the twin towers, he said that, whoever the culprits, the United States proceeded to use the events to try to prolong a dying world order of domination.

Addressing the annual opening of the UN General Assembly, just miles from the site of the deadliest of the 9/11 attacks, the Iranian leader said the US responded to the attacks by firing up a “propaganda machine” to convince the world that war was the necessary response.

“We were all saddened for the 3,000 lives lost on 9/11,” he said, but he added that “since then hundreds of thousands of people have been killed in Afghanistan and Iraq.”

The US delegation and others walked out of Ahmadinejad’s speech after he began enumerating his theories as to who could have been behind the 9/11 attacks, the second of which was that “some segments within the US government orchestrated the attack to reverse the declining American economy and its grips on the Middle East in order also to save the Zionist regime.” The US holds Al Qaeda responsible for the attacks.

Ahmadinejad said the international conference he proposed would “study terrorism and the means to confront it.”

The controversial leader, who had to pass by chanting protesters railing against his rule on his way into the UN headquarters, was –despite his 9/11 tangent – less fiery than in past years, though in some ways no more modest. He unilaterally assigned the General Assembly the task of designing within one year a new UN governing structure free of the control of a few powerful countries sitting on the Security Council – a body he called one of the world’s least democratic and just.

Ahmadinejad did not directly respond to the invitation Western powers have extended to Iran to return to negotiations over its nuclear program – other than to repeat that Iran is always open to dialogue that is based on mutual respect and equal rights. But he did speak at length on the global nuclear issue, criticizing nuclear arms as a tool of domination for the few who possess them, but extolling nuclear power as a clean and inexpensive energy source for all.

‘Nuclear energy for all’

Declaring another goal for the coming year, he said 2011 should be proclaimed “a year of nuclear disarmament” with the motto: “Nuclear energy for all, nuclear weapons for none.”

Ahmadinejad’s address followed by a few hours President Obama’s declaration to the same international gathering that Iran is the only signatory to the Nuclear Non-Proliferation Treaty unable to demonstrate to UN nuclear energy officials that its nuclear program is solely peaceful in nature. As if in response, the Iranian leader acknowledged Iran’s lack of full cooperation with the International Atomic Energy Agency, but said Iran is exercising its international rights.

“Yes it’s true, we have never submitted to the IAEA’s illegally imposed pressures,” he said, “and we never will.” As for the fourth round of economic sanctions approved earlier this year, he said they are merely “destroying the remaining credibility of the Security Council.”

Despite such worldly issues, much of Ajmadinejad’s speech focused on theological themes and a world where he said man’s spiritual nature is obscured by materialistic pursuits.

As he has often in the past, he railed against a Western society that destroys “the purity and exquisiteness” of women. And he referred to the recent controversy over a proposed burning of the Quran by a Florida minister, calling such acts evil but then concluding that “the truth cannot be burned.”

He then held aloft both the Quran and the Bible, and declared, “We pay respect to both books.”

READ the Official UN transcript of his speech here: