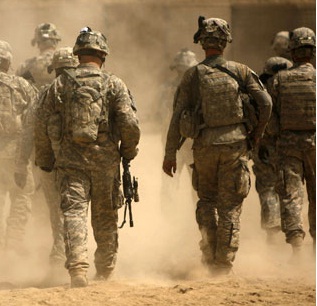 WASHINGTON — A group of US soldiers is facing accusations of randomly targeting and killing Afghan civilians for sport, The Washington Post reported Sunday.

Citing army legal documents and interviews with people involved in the case, the newspaper said the case involved rogue members of a platoon from the 5th Stryker Combat Brigade, 2nd Infantry Division.

The game started last winter, when one Afghan man approached the soldiers in the village of La Mohammed Kalay, the report said.

As the man neared, one soldier created a ruse that they were under attack, tossing a fragmentary grenade on the ground, the paper noted. Then others opened fire, killing the man.

According to The Post, the unprovoked attack on January 15 was the start of a months-long shooting spree against Afghan civilians that resulted in some of the grisliest allegations against American soldiers since the US invasion in 2001.

Members of the platoon have been charged with dismembering and photographing corpses, as well as hoarding a skull and other human bones, the report said.

The father of one soldier said he repeatedly tried to alert the army after his son told him about the first killing, only to be rebuffed, The Post said.

Military documents allege that five members of the unit staged a total of three murders in Kandahar province between January and May, the paper noted.

Seven other soldiers have been charged with crimes related to the case, including hashish use, attempts to impede the investigation and a retaliatory gang assault on a private who blew the whistle, according to The Post.

Army officials have not disclosed a motive for the killings, the report noted.

But a review of military court documents and interviews with people familiar with the investigation suggest the killings were committed essentially for sport by soldiers who had a fondness for hashish and alcohol, The Post said.