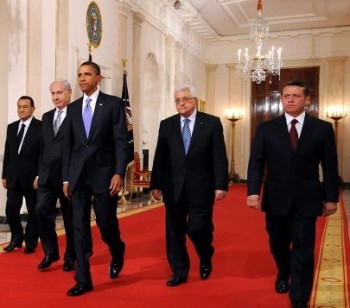 It was an image for the history books. At least that’s what the five world leaders would like to have thought as they strutted down the red carpeted hall of the White House recently with their heads held high. Forming a well-choreographed and symbolic flying “V,” the US president led the way, flanked by his counterparts representing Israel, Palestine, Jordan and Egypt. These men in suits wanted to show the world that they’re ready to plow through any and all obstacles that stand in the way of peace in the Middle East.

It’s a picture that bears a striking resemblance to one taken a decade and a half earlier when then US President Bill Clinton led the same nations’ representatives down the the same red-carpeted hall at the White House. All one needs to do is replace those leaders with their successors, save the Egyptian president who was present in both. Another historic image — although one most have probably forgotten — that also sought to send the message that peace is on its way.

And yet here we are, 16 years later, with the highly anticipated peace still on its way, or so we’re told. A closer look at the five representatives in the picture should help explain why it’s yet to arrive.

Spearheading the group is Barack Obama. Despite running a campaign built around the slogan of “change,” the US president has shown that when it comes to the Middle East his policies barely differ, if at all, from those of his predecessors. Not only has he continued the occupations of Iraq and Afghanistan while arming and supporting the most brutal and undemocratic autocracies around the region, but he has also been sure to maintain the US’ “special friendship” with Israel regardless of the ongoing injustices the latter commits on a daily basis.

Next to him is Benjamin Netanyahu, the Israeli prime minister. As leader of the country who receives the most aid from the US, Netanyahu has not only continued the occupation and the siege of Gaza, but he refuses to slow down — not to mention end — the ongoing colonization of Palestinian land in the West Bank through settlement construction and land theft. If left unchecked, Netanyahu’s aggressive rhetoric and actions toward nearby nations will most likely spark another regional Israeli-led conflict before he leaves office.

But more importantly than understanding these two nations whose roles in the Middle East should come as no surprise to anyone by now, is understanding the “other” side represented in Washington: the Arab governments.

At the forefront is the supposed representative of the Palestinian people, Palestinian Authority President Mahmoud Abbas. In recent years, the PA’s most notable governing role has been its repression of an already oppressed people in the occupied West Bank and Gaza Strip. To quell any popular protest by Palestinians against the Israeli occupier, the PA has used its American-supplied and Israeli-approved weaponry and riot gear, and arrested and beaten Palestinians who voice their dissent. This was most clear during Israel’s brutal assault on Gaza in the winter of 2008-09 and after the more recent attack on the Gaza Freedom Flotilla when Palestinian protestors in Ramallah and elsewhere were prevented from taking to the streets. Only two weeks ago, after a car full of Israeli settlers were killed in the occupied West Bank, the PA waged an arrest campaign rounding up hundreds of Palestinians in the occupied territory in a move that has been condemned by numerous Palestinian human rights organizations.

More importantly than the above, is the question of the Abbas government’s legitimacy. Recently, the Israeli daily Haaretz quoted Abbas’ spokesperson Nabil Abu Rudaineh as saying: “President Mahmoud Abbas came to power through free, democratic and authentic elections supervised by more than two thousand international and Arab monitors.”

One has to first wonder how “free” and “democratic” elections can be when held in a territory under foreign military occupation. Moreover, the majority of Palestinians are living in a forced state of exile and were not invited to cast their ballots. But for the sake of argument, let’s take Abu Rudaineh at his word.

Abu Rudaineh seems to contend that those elections, held in January 2005, somehow granted the PA president with an unlimited mandate. However, the term was limited, and Mahmoud Abbas was elected by voters to serve four years in office, meaning that his elected mandate as president of the PA expired more than a year and a half ago.

In a move out of the autocratic ruler playbook, Abbas’ term was extended by the PA’s “emergency powers” out of fear that he would be replaced by someone from a rival party — most likely from the more popular Hamas movement — should new elections be held. Ironically, the most recent “free” and “democratic” elections held in Palestine were in 2006, when Hamas defeated Fatah, taking the majority of seats in parliamentary elections. It’s no surprise that Abu Rudaineh made no mention of this event in his statement.

Despite being elected by the Palestinian people living under occupation, Hamas has been subjected to boycott by the US and the PA and the area of governance it has been confined to laid siege to by Israel and Egypt. While Hamas hasn’t been ideally democratic in its governing of the besieged Gaza Strip, its continued ostracism by Washington, Israel and the PA sends the message that when it comes to peace talks, democracy need not apply.

This message was reinforced through the presence of the two other Arab leaders at Abbas’ side.

On one end is Hosni Mubarak who has ruled Egypt under suffocating “emergency laws” (sound familiar?) since 1981 when he became president. Although friendly with the US and Israel, Mubarak runs one of the most brutal and corrupt dictatorships in the region. With a leadership dependent on — and one of the main beneficiaries of — US aid, Mubarak’s mukhabarat (intelligence service) tolerates no dissent. Many of those who have tried to challenge his rule have joined the tens of thousands of political prisoners in Egypt’s jails, where torture and abuse are well-documented and commonplace.

Pictured opposite Mubarak is Jordan’s King Abdullah II bin al-Hussein. Although Jordan is often hailed in the US as a “modern” and “moderate” state, there is little democracy to speak of there. Parliament, which has very little power, was dissolved last year half way through its term without any explanation, and elections delayed until this November will be held under a law widely criticized by opponents and passed by cabinet decree under “emergency provisions.” Draconian laws on the press and nongovernmental organizations severely limit freedom of speech and association, and political activists carry out their work in the ubiquitous shadow of the country’s security services.

It’s no coincidence that both of these men are considered two of the US’ strongest allies in the Middle East. Both continue a US-backed policy of “peace” with Israel despite that policy having little to no support from their populations.

That said, the image of the five men at the White House can easily be dissected as the following: a dictator, a monarch, a puppet and two heads of government responsible for the region’s only military occupations — not the best ingredients for making world peace.

Although not invited to the White House, the numerous grassroots movements across the Middle East present the best hope for bringing peace and justice to this region. And it’s those increasingly popular movements that people around the world concerned with the fate of the Middle East should support. In the meantime, let the puppets and their masters walk on red carpets in Washington while the real change is made by those with their feet on the ground.

Matthew Cassel is based in Beirut, Lebanon and is Assistant Editor of The Electronic Intifada. His website is http://justimage.org.